10 mine deactivators killed in cold blood in Afghanistan 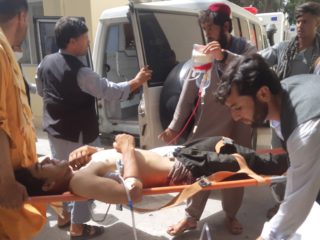 Ten mine deactivators were killed in cold blood in Afghanistan on Tuesday night, the Halo Trust, the non-profit demining organization for which they worked, confirmed Wednesday. So far the facts. The authorship of the attack is disputed. The Afghan government has held the Taliban responsible, but a guerrilla spokesperson has denied it and the NGO director has stated that the local branch of the group helped its employees repel the assailants.

The attack occurred at 9:50 p.m. local time (7:20 p.m. PST) on Tuesday when gunmen stormed the Halo demining camp in Baghlan province, north of Kabul. Ten employees were killed and another 16 injured, according to the Halo statement. At the time of the attack, there were about 110 men in the camp, “members of the local communities, who had finished their work in the surrounding minefields.” The assailants went “bed by bed” shooting them “in cold blood.”

Both Baghlan police and Interior Ministry spokesman Tareq Arian have held the Taliban responsible. According to government sources, the guerrillas frequently attack those who are in charge of demining tasks because these workers help the authorities to deactivate the explosive devices that their militiamen hide on the roads. However, the demining organization avoids directly accusing anyone and attributes the attack to “an unknown armed group”.

In addition, its executive director, James Cowan, has told the BBC that the local Taliban came to the aid of their employees and managed to drive out the attackers. “We don’t know who the assailants were. We could speculate, but I’m not going to. I believe that at Halo Trust we fear the ability to act on both sides of this horrible conflict ”, explained this former British military man who has led the NGO for six years.

The Taliban guerrillas, whose stated goal is to topple the Afghan government backed by the international community, have denied involvement and condemned the attack. “We have normal relations with NGOs, our fighters never carry out such brutal acts,” tweeted their spokesman, Mujahid Zabihullah.

Since last year the Taliban signed an agreement with the United States in Doha for the departure of foreign troops, there have been numerous attacks and assassinations that no one claims and that has encouraged fear among the population. But that guerrilla, which pledged with Washington not to attack large urban centers and reduce civilian casualties, is not the only insurgent group operating in Afghanistan. The local branch of the Islamic State, which emerged in 2014, is often behind the most brutal actions.

A video that the Baghlan police has shared with Afghan journalists seems to point in this direction in the attack on the mine deactivators. In it, one of the survivors says that, before shooting, the assailants asked if there were any members of the Hazara community. “Five or six armed men arrived, they led us to a room. First they took our money and cell phones, they asked who our leader was and if there was any hazara among us, “he says before adding that they answered that there was no hazara. Despite being hit in the head, the man says he managed to escape through a window.

The Hazara, an ethnic minority who profess the Shiite branch of Islam, are in the crosshairs of the Islamic State, a Sunni supremacist group that does not recognize their creed and considers them infidels. They have been the target of numerous attacks. The most recent, on May 8, against a school for girls in Kabul, left 85 dead and 147 injured. However, neither the Islamic State nor the Taliban claimed responsibility for this or other recent attacks.

Even when the Islamic State has claimed responsibility for an attack, the Afghan government routinely blames the Taliban, insisting that it was dismantled two years ago when its bases in Nangarhar province were destroyed. According to the Interior spokesman, between May 24 and June 7, the Taliban carried out 30 murders, 115 bomb attacks and 6 suicide attacks, resulting in 75 civilians dead.

The Taliban guerrillas have not only been attacking uniformed men and civilians who work for the government for two decades, but in the face of the withdrawal of foreign forces from the country they are trying to gain ground, especially in rural areas. His militiamen dispute government control in 26 of the 34 provinces of the country and in recent days have managed to capture ten districts, according to official sources. Baghlan has been the scene of heavy fighting between them and the security forces for several weeks.

After four long decades of successive wars, Afghanistan is littered with mines and unexploded ordnance. Several organizations are working to eliminate the danger it poses to the population, an effort that was redoubled after the US ousted the Taliban from power in 2001. Halo is the largest of them and has had a presence in the Asian country since 1988. The majority of its employees are not bomb operators but inhabitants of the areas in which they work, who know the terrain and who are trained by the NGO for demining tasks.

The departure of international troops from Afghanistan, which is due to conclude before September 11 of this year, coinciding with the anniversary of the US intervention, has unleashed panic among Afghans who have worked with foreign armies and also among US personnel. NGOs. They fear that the Taliban will retaliate against them. Earlier in the week, the Taliban released a message trying to reassure them and assuring that if they regretted what they had done, they should have no fear. The increase in visa applications, especially from translators, is a tangible example of the mistrust they generate.