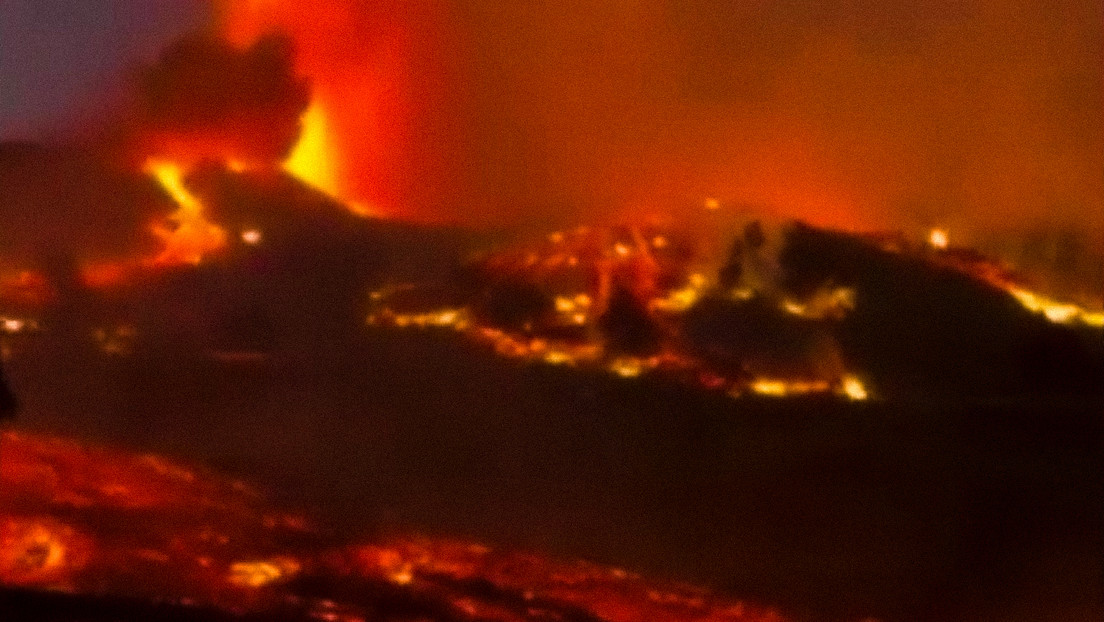 100 homes devoured and 5,000 evacuated: the shocking images left by the eruption of the volcano on the Spanish island of La Palma (VIDEOS, PHOTOS)

This Sunday the Cumbre Vieja volcano on the island of La Palma, in the Canary archipelago, in Spain, erupted. For eight days the seismic swarm, with more than 4,000 earthquakes, had not ceased and heralded the possibility of this outcome, although there was no certainty after the volcano had been inactive for 50 years.

But in the afternoon the lava began to shoot out, which gave rise to a unique natural spectacle. Since then, eight mouths of the Cumbre Vieja, located in the south of the island, have not stopped expelling magma forming multitude of lava rivers.

Lava moves at about 700 meters per hour, slower than human pace, with a temperature of 1,075 degrees Celsius.

It is estimated that the burning rivers have already swallowed more than a hundred houses and other infrastructure, such as rural accommodation, in addition to numerous agricultural growing areas, a sector that is the main livelihood of a good part of the inhabitants of the area, although the good news is that there is no regret personal injury.

Yesterday on La Palma I took one of my best photos, “Forces of Nature”. I have always said that photography is the art of patience Canon EOS 5D Mark IV with Leica APO-TELYT-R 1600mm f / 5.6 telephoto lens Can be used freely but quoting the author please. pic.twitter.com/XXcEfx6a8W

The president of the Canary Islands, Ángel Víctor Torres, has stated in an interview on Antena 3 that at this time “there is no certainty” about the specific number of homes affected and has described the scenes experienced as lava tongues of “six seven meters” that “gobbles up the houses.”

🔴 UPDATE 23: 00h #RashLaPalma ➡️ The operation of #Firefighters 🚒 in #LaPalma change location and climb after the head of the wash has crossed the road. 6 professionals and 6 Guide volunteers will continue to work during the night. @CabLaPalma@112canariaspic.twitter.com/N5AVbXfgmw

For her part, the spokesperson for the Spanish Government, Isabel Rodríguez, has stated in an interview on public television that she is going to “analyze how the agricultural and material circumstances are to give them a response as agile as possible”, in reference to the aid to affected people.

It is speculated that the lava still takes between 12 and 14 hours to travel around six kilometers that now separate it from the sea. The area through which experts predict that the tongue of fire will continue passes through numerous houses and the largest banana plantation on La Palma.

So far there has been the evacuation of just over 5,000 residents, most in the core of Todoque, belonging to the municipality of The Plains of Aridane. At the moment it is not expected that more people will be evicted.

Spectacular images: this is how lava from the La Palma volcano enters homespic.twitter.com/611ja8uaU1

The eruption is taking place in the south of La Palma, the least populated place on the island, and the passage of the lava so far has not coincided with any nucleus, one of the greatest fears that are harbored by the greatest number of damages. that it would produce.

The eviction has also affected tourists, and around 500 have had to be relocated from the hotels where they were staying.

How long is it going to last?

There is still no certainty about how long this episode of volcanic eruption will last, although it is estimated that within 48 hours its duration can be predicted, which will depend on the amount of magma that has accumulated in the reservoir of the volcano.

It is estimated that the magma pocket that is rising to the surface is between 3 and 5 kilometers deep and that it is connected to another that is 20 or 30 kilometers away. Thus, the feedback between the two could make the eruption last in time.

Video made by our colleague María Asensio who is at one of the lava flows of the eruption … goosebumps #LaPalmaeruptionpic.twitter.com/XlFIOMQ1bi

The scientific coordinator of the Volcanological Institute of the Canary Islands, Nemesio Pérez, explained on public television that they are monitoring sulfur dioxide because “it is a very important parameter” to predict when this process will end.

Panorama of the lava rivers that continue to descend the slope of La Palma, Spain. pic.twitter.com/8gIG0dJAWt

The Canary Islands archipelago, located in the Atlantic, is the only Spanish region with active volcanism. The National Geographic Institute has recorded 15 episodes since the 15th century on the islands. The last two were an eruption in 1971, also on the island of La Palma, and an underwater eruption on the island of El Hierro in 2011.

Sánchez suspends his trip to the UN

The President of the Spanish Government, Pedro Sánchez, announced on Sunday the suspension of his planned trip to New York to participate in the UN General Assembly. It is expected that he will make a final decision depending on the evolution of the eruption and for the moment it is stated that the trip is not canceled, but suspended.

I have just arrived in La Palma where I will meet with the Steering Committee of the Cabildo Insular to see first-hand the evolution of the volcanic eruption that they are experiencing on the island. The Canary Islands have the support of the Government of Spain to face this difficult situation. pic.twitter.com/6KKtM5rBPX

On Sunday night the president moved to the island, where he is planned to remain this Monday visiting affected areas and following the evolution of the volcanic eruption.

The Military Emergency Unit with 67 members and 30 vehicles has been deployed in the area, figures that could increase to 180 personnel and 57 vehicles, between light and heavy, throughout the morning. In addition, three seaplanes will also arrive in the early afternoon in case they have to fight fires that sometimes occur associated with the expulsion of lava.

The airline Binter has announced early this Monday four flights to or from La Gomera, the neighboring island of La Palma, have been canceled. This decision comes after yesterday the Spanish airport operator Aena recommended to the airlines not to fly for three days to three islands in the archipelago: La Palma, La Gomera and El Hierro.

This is how the eruption of the volcano of #LaPalma from flight NT352 that covers the route Gran Canaria – La Gomera. #flyingwithBinterpic.twitter.com/JErtIaVQOH

The director of airports of Grupo Canarias in Aena, Mario Otero, has communicated that “there is no declared affection in the air traffic” and that everything is monitored and “very controlled”; In addition, it has been reported that the ash cloud is moving south, specifically towards the island of La Gomera, as confirmed by the Spanish Meteorological Agency.

Looping images #RGB from 00 to 05:45 UTC from satellite #Meteosat@eumetsat that allow observing the plume of smoke from the eruption #LaPalma heading towards the island of La Gomera pic.twitter.com/kxuhcOXQNv

The volcano is emitting into the atmosphere between 6,000 and 9,000 tons of sulfur dioxide per day, according to a first estimate of the Volcanological Institute of the Canary Islands. As of this Tuesday, more details about the expected evolution of the eruption will be available.