15N: The US imposes sanctions on senior Cuban officials for preventing the opposition march | International 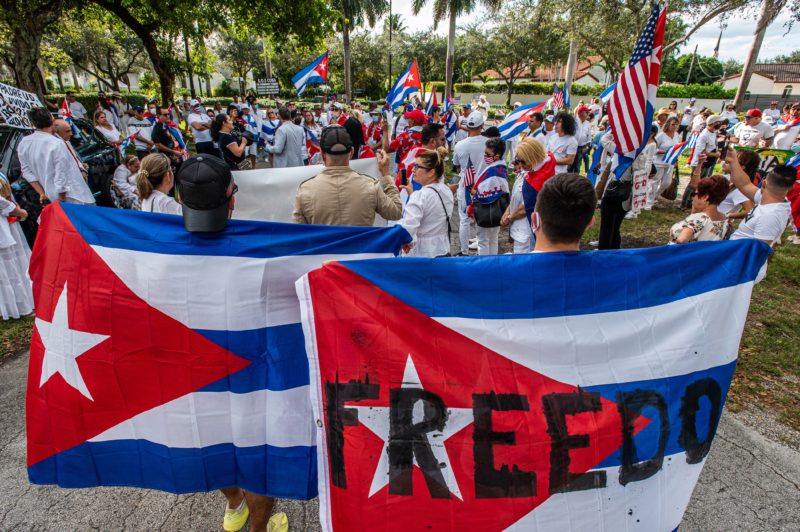 Back to the old days of the frontal confrontation between Washington and Havana, with sanctions included. Ten months after his arrival in the White House, President Joe Biden has not only failed to eliminate one of the coercive measures adopted by Donald Trump, as he promised in the campaign, but he has jumped on the bandwagon of pressure and speech every increasingly inquisitive, especially as a result of the July 11 protests in Cuba and the frustrated march of opponents for change, on November 15.

The United States announced on Tuesday that it would ban nine Cuban officials from entering its territory, including high-ranking officers of the Revolutionary Armed Forces and the Ministry of the Interior, “involved in the repression and arrest of activists who wanted to demonstrate” on the 15th. -N. According to a statement from the Secretary of State, Antony Blinken, the nine officials “took steps to deny Cubans their right to freedom of expression and peaceful assembly.” The names of those sanctioned have not been revealed at the moment. These types of sanctions have more symbolic meaning than practical consequences. It is difficult to think that a high-ranking military officer, or an active member of the Interior Ministry, is going to travel to the United States, and unless Washington is willing to grant him a visa even without being sanctioned, so the Cuban government minimizes its scope .

Three days earlier, on November 27, Blinken himself referred in a statement to the events that occurred a year earlier in front of the doors of the Ministry of Culture, where a group of 300 young artists demonstrated to demand a dialogue with the authorities in demand for freedom of expression and cessation of harassment against dissidents, after the forced eviction of a protest at the headquarters of the opposition Movement San Isidro. “On repeated occasions since last year’s historic meeting in front of the Ministry of Culture, Cubans have asked their government to listen to their calls for fundamental freedoms, democracy and respect for human rights. On each occasion, the regime squandered the opportunity for dialogue, doubling down on a bankrupt ideology and a failed economic system that cannot meet the basic needs of Cubans, “he said.

Blinken congratulated “the Cuban people for continuing to ask their Government to listen to their aspirations and demand respect for universal human rights and fundamental freedoms.”

Havana’s response to the new sanctions – after the July 11 protests, the Biden Administration has already adopted similar ones against high-ranking military and police officers – was swift. A few hours after the State Department’s announcement, Cuban Foreign Minister Bruno García once again accused the United States of being behind the protests in Cuba and manipulating them at their convenience to try to provoke a regime change on the island. “The United States persists in the error of supposing that our Government would allow it to provoke social destabilization in Cuba. It is a right and a duty to safeguard sovereign prerogatives and reject foreign interference. The hostile measures announced today [por el martes] they do not alter that determination, “said the foreign minister, who has described Washington’s attitude as” obsession “on several occasions, pointing out that between J 11 and N 15 there have been more than 100 pronouncements by senior US officials to condemn what happened in Cuba.

After the parenthesis in this story of confrontation that the last years of the Barack Obama Administration supposed, when both countries began the thaw and took steps towards normalization, that Donald Trump stopped in his tracks – during the four years of his mandate, more Of 200 measures to intensify the embargo, including restrictions on the sending of remittances, suspension of direct flights and bans on North Americans’ travel, many believed that the arrival of Biden would inaugurate a new stage of bilateral détente.

It has not been so.

This same week, Juan González, director of the National Security Council for the Western Hemisphere in the Biden Administration, cleared up doubts about what can be expected. “There is a rule before July 11, and after July 11,” Gonzalez said. And he added that, after what happened last summer on the island, the United States has pressed the “pause button” on the announced revision of Trump’s policy of hostility towards Cuba. According to the senior official, Biden “feels strongly committed to issues of human rights and democracy”, and is not someone who thinks “that change will come” if it is not acted upon. Both governments are back on the roadblocks.