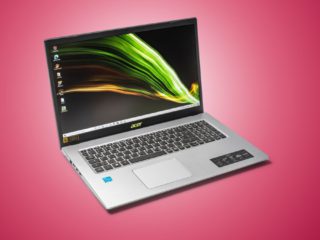 The processor manufacturer Intel has been pursuing a two-pronged approach with CPU cores for years: In addition to the large cores found in Core-i and Xeon CPUs, Intel also maintains an architecture rail for small cores. The latter are the successors of the former Atom netbook processors, but this brand name is only used for embedded models.

The Pentium Silver N6000, developed under the code name Jasper Lake, works in the Acer Aspire 3 (A317-33) tested here. It’s the first new low-end chip in a long time; the 14-nanometer predecessor Pentium Silver N5000 (Gemini Lake) was unveiled at the end of 2017. The new 10 nanometer cores called Tremont already celebrated their debut in the special processor Lakefield, which was only available in the Samsung Galaxy Book S (test) and Lenovo ThinkPad X1 Fold (test) at the time of testing in mid-May 2021.

The fact that Intel no longer uses the Atom name for consumer products is probably due to the fact that it is negatively impacted: The first Atom netbooks were very cheap, but also very lame. The latter is obsolete: the micro-architecture has long been switched from in-order to out-of-order, which speeds up code processing; Single-thread loads are processed quickly thanks to high turbo clock rates, and instead of hard drives that slow down, rapid SSDs are now standard even in inexpensive notebooks. When booting Windows, starting applications or rendering a website, you don’t feel any brakes.