18 years since the invasion of Iraq led by George Bush 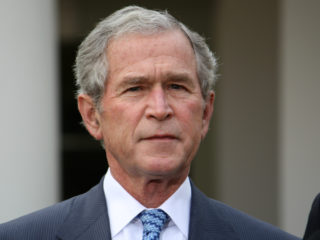 “Right now, US and coalition forces are in the early stages of military operations to disarm Iraq, liberate its people and defend the world from grave danger.” These words, spoken by George Bush 18 years ago, began the invasion and war in Iraq. A US-led military campaign with the support of other Western countries, including Spain, to invade Iraq and “liberate the Iraqi people from Saddam Hussein.” The invasion was also justified by the alleged weapons of mass destruction that the Iraqi government possessed, weapons that are never found.

The image of US soldiers toppling a statue of Saddam Hussein in Baghdad in April became the symbol of the first stage of the invasion. A foreign army liberating a people from their evil dictator. However, this image of the United States as a “liberator” diminished as the operation progressed. The capital was bombed so heavily it has not yet been completely rebuilt. After the end of the invasion, proclaimed on May 1 by President Bush, the war began that would last until 2011. The United States tried to bring order to the country after capturing Saddam Hussein in December, but in Iraq the conflict broke out. hatred and chaos. As a result of the US invasion, religious and sectarian tensions in the country increased, leading to clashes between Shiites and Sunnis. With the war also began the humanitarian crisis. According to United Nations sources, 4 million people need humanitarian assistance and more than 1 million remain displaced within the country.

Also, to face the American and foreign presence, radical groups such as Daesh were born in Iraq. After the Barack Obama administration declared the official end of the war in October 2011, instability and violence continued within the country. Terrorist groups grew stronger and sectarian divisions intensified. Communities such as the Kurdish or the Yazidi, who suffered genocide at the hands of Daesh, were persecuted. In 2014 the Islamic State fixed its caliphate in the city of Mosul, which after intense bombardments was completely destroyed. The United States again led a military operation, this time to defeat the Islamic State, which also controlled territories in Syria. Finally, on July 17, 2017, the Iraqi prime minister announced the liberation of Mosul from the jihadist group.

However, this defeat did not mean total stability in Iraq. Between 2019 and 2020 in the Middle Eastern country there were intense protests due to the general malaise of the citizenship and against corruption and foreign interference. The so-called Tishreen Revolution, which was very reminiscent of the Arab Springs, cost the lives of more than 400 people. The demonstrations also led to the resignation of Prime Minister Abdul Mahdi. Barham Saleh, the current president, has promised the passage of a new electoral law that will allow elections to be fairer and better represent the people.

Today, the cities of Iraq are rebuilding little by little. “To rebuild Iraq is to restore hope in Iraq and to restore the stability of Iraq is to stabilize the states of the region and the world,” said Salman Al Jumaili, former Iraqi Planning Minister. In 2018 UNESCO launched an initiative to rehabilitate Mosul under the name “Revive the Spirit of Mosul”. This project consists of the reconstruction of Mosul “by empowering the population as agents of change who participate in the process of rebuilding their city through three main axes: heritage, education and cultural life.” The recent visit of Pope Francis to the Iraqi city throws hope in the process of stability and marks the beginning of pacification throughout the country. “Fraternity is stronger than fratricide, peace is stronger than war,” said Pope Francis in an emotional prayer for the victims.