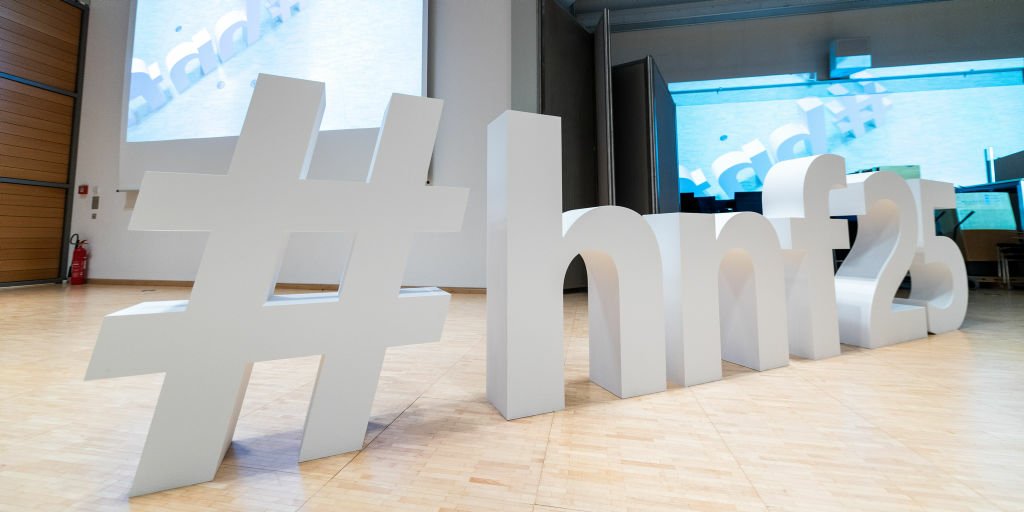 25 years ago, Federal Chancellor Helmut Kohl opened the Heinz Nixdorf Museum Forum (HNF) in Paderborn. In his speech, Kohl praised the new museum concept to convey the path to the information society to as many people as possible. Approaches such as the “Schools on the Net” initiative or the “Digital Workbench” in the HNF should ensure that as many people as possible understand what the path to the information society is all about.

Kohl wished the newly opened house to have a similarly high number of visitors as the Bonn House of History. In any case, the concept worked: if in 1996 there were 17,000 visitors by the end of the year, in 1997 there were 72,000. Until the onset of the corona pandemic, the annual number of visitors fluctuated around 120,000. The area of ​​the HNF – 18,000 square meters, 6,000 square meters of which is a permanent exhibition – is the largest computer museum in the world.

The building used to be the headquarters of Nixdorf Computer AG. The company made this possible in many ways Establishment of a computer museum: When Heinz Nixdorf celebrated the 25th anniversary of his successful company in 1977, he was given numerous computing devices that formed the basis of a collection. In 1982 the collection had grown so large through acquisitions that the first plans for an exhibition began. With the death of Heinz Nixdorf, the project was put on hold and only started again in 1993 after the end of Siemens-Nixdorf.

After the company headquarters had been gutted and refurbished, Federal Chancellor Helmut Kohl and North Rhine-Westphalia’s Science Minister Anke Brunn opened the Heinz Nixdorf MuseumsForum. The very name indicated that the company wanted to be more than a museum and offer events in a large lecture hall. The HNF should be “suitable for conferences, talk shows and theater”. In the first place it was about getting the visitors in the mood for the information society.

“The museum gives us an idea of ​​how far we have to turn our heads to get a complete view,” explained Brunn. She had worked in the computer center of the University of Cologne for ten years. Helmut Kohl approached the problem more fundamentally in his speech: “Earlier, I had the opportunity to take a short tour of the exhibition. The journey through time through the development of information technology, the exhibits and the diverse range of media cast a spell over the visitor. I really like the way the future technologies are approached in this house through the stories. It teaches us how much technological progress has made people’s lives easier and better The arc to the present and the future is also drawn. This gives us an idea of ​​the path to the information society that lies ahead of us. It is good that this is done in a way that is also understandable to the layperson. If we If you want to win people over to the new, the experts must not remain to themselves with their technical terms – it has to be our goal be that as many as possible understand what it is about. “

A slightly modified version of the speech can be found in the archive of the Konrad-Adenauer-Stiftung. In his own way, the first HNF managing director Norbert Ryskadas formulated the concept of the HNF: “Better to get bored with 10 professionals than overwhelm 100 laypeople.” At a time when Internet cafés were still rare, the museum attracted laypeople with a “digital workbench” with 16 networked workstations and offered a multimedia “visit to the computer”.

Immediately after the opening of the HNF, there was a generally understandable series of lectures on the history of computing, as well as conferences such as the one on “New electronic media in museum education”. What the day failed to make it into the night: In 1998, the series of WDR computer nights in the HNF started with a night in which the world’s largest Linux cluster with 512 computers was put into operation. This was followed by a night under the title Vision 2000, in which robotics was the focus and a party night in which the 5th birthday of the HNF was celebrated.

In the spring of 2001, the permanent exhibition with its typewriters, office technology and computers was expanded to include an area dealing with the world history of cryptography. The first major special exhibition followed was the exhibition Computer.Gehirn, which dealt with the thinking of people, machines and artificial intelligence, which has become a commonplace in political speeches today: “Do you think they think?”

In 2006 there was the next special exhibition: Computer.Medizin was concerned with whether high-tech can ensure health and quality of life, from the cradle to “Ambient Assisted Living”. Things got more agile in 2009 when the special exhibition Computer.Sport started and the current sports studio was broadcast from the HNF. The following year, a special exhibition under the pretty motto Codes and Clowns dealt with a single person, the juggler and computer scientist Claude Shannon. It was followed by a whole year of exhibitions in 2012 with Genial & Secret, with several installations that dealt with the life and work of Alan Turing. The outsider Turing was followed by a special exhibition on the role of women in computer history under the title “In the beginning was Ada”. In the end it was about the departure into space. A review of all the HNF exhibitions can be found on the HNF overview page.

Enzensberger at the opening

While the HNF had a relatively banal credo at its start 25 years ago in honor of the namesake and computer pioneer Heinz Nixdorf, “who wanted to promote people through information technology”, its determination has never been formulated more elegantly than by Hans Magnus Enzensberger, whose credo in the In the entrance area of ​​the HNF you can read: “Everything that can be seen in this museum is surpassed by nature. Technology cannot hold a candle to your inventiveness and diversity. It works wonderfully, but very slowly.

Their evolution takes millions of years. The reason for this is simple: Plants and animals cannot arbitrarily exchange experiences and pass them on from one generation to the next. Humans are the only species that can speed up their own history. Only humans have media that allow them to communicate about what they have learned. He can save his experiences and pass them on. The most important of these media is language. The ability to acquire and use natural languages ​​is genetically anchored. All other media are based on this. They are “unnatural”, products of a second, cultural evolution: images, knots, cuneiform and letter fonts, abstract codes such as notes, digits and other symbols and visual media of all kinds. Ultimately, all of these characters can be converted into analog or convert digital signals. This turns them into technically manipulable data. Storage and reproduction techniques are developing hand in hand with these diverse codes. Book printing was a decisive step on this path. The gradual overcoming of space by post, telegraph, telephone and radio leads from local communication to global networking. Information technology has contributed more than any political ideas to the globalization of human society. The last step in media history so far is the development of the computer, the chip and its diverse applications. Our access to the network, memory and computing capacity is almost unlimited. What we’ll do with it is in the stars. “