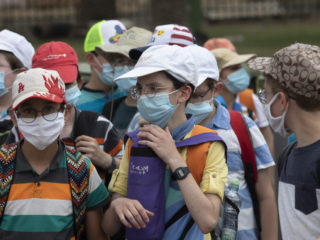 A group of 44 Spanish children who were attending an English course at the Education First school in Malta have been confined to a hotel on the island after one of them tested positive for covid-19, they reported this Thursday local media.

The Embassy of the Iberian country has asked the families of the minors, between 11 and 14 years old, to contact them by email to provide them with as much information as possible about their relatives.

Those families / language schools with MINORS IN QUARANTINE IN MALTA WITH POSITIVE COVID, please send details of the same to [email protected] to collect all the data before possible return flight.

For her part, the spokeswoman for the Government of Catalonia, Patrícia Plaja, said at a press conference that, after learning of the case, the Executive for whom she works is carrying out the pertinent steps “in case they can be given some kind of helps “, both to the children and to the families affected.

“We want reassure families because we will know how to do it and we will ensure that they are as good as possible “, explained Xavier Martí, general director of Education First Spain, who has indicated that they are in direct contact with both the Spanish Ministry of Health and the Spanish Embassy in Malta.

He also indicated that they are “very focused on making the confinement of children as less problematic as possible”, although he points out that his company has to follow all the health guidelines imposed by the island.

Martí assured that the students have “a highly experienced team made up of up to nine people who are in Malta giving all possible support to the children.” However, Laura Turi, the mother of one of the minors, declared that both her son and the rest of the children – some of them with symptoms – are neglected and they do not receive enough information.

“It cannot be that the children are alone and that no doctor has gone to see them when they have been over 39 degrees for days, and that they are not given anything to drink,” said the woman, who explained that she and other parents contemplate the possibility of taking legal action against Education First.