50 pellets and thrown from a bridge into a river: The death of one of the last jaguars in the Atlantic Forest of Brazil 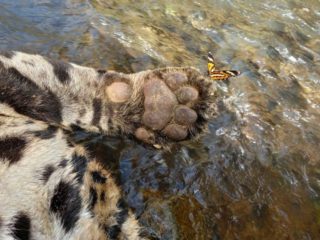 ‘Máscara’, an eight-year-old jaguar, was thrown from a bridge into a river in an environmental protection zone in the interior of the Brazilian state of Sao Paulo. The autopsy revealed that they killed him viciously: he had 50 pellets in his body and one hit his heart.

The animal was one of the last 20 felines of this species that live in the conservation unit in the Continuo Serra de Paranapiacaba region in the Atlantic Forest, one of the most important and most threatened biomes in the country and present in 17 of the 27 states.

The first hypotheses suggest that they killed him in a rural area and then transported him to the highway to be thrown into the river without mercy.

Although the police are still investigating the case, an X-ray carried out on the animal showed lead bullets and scars on its right leg, which was also broken, which is why it was concluded that in recent months it had been shot on more than one occasion.

A team from the Chico Mendes Institute for Biodiversity Conservation (ICMBio) has been working together with the Florestal Foundation for more than 20 years on a project to identify and conserve jaguars in this area.

They were the ones who baptized ‘Mask’, for some spots on his body that resemble the masks used to cover the eyes. One of the main axes of this work team is based on mobilizing society in favor of the conservation of the species.

For this reason, neighbors like Dona Delita and her husband, Don Roque, contacted them when the feline attacked their property. Since then, the researchers visited the couple almost daily and taught them to use techniques – lights, horns or electric fences – to scare the animal away. But ‘Mask’ did not give up in its efforts to get food.

The cameras installed to monitor these animals showed that the jaguar was injured and had difficulty walking. “That could be one of the reasons why he attacked domestic animals. A weakened jaguar looks for easier prey to hunt for food. Catching a chicken or pig inside the pen is much easier than chasing a wild boar. Mask now I couldn’t hunt inside the forest, “they say from the Florestal Foundation.

“We began to plan his capture, which was justified because he was injured, but there are people who prefer to solve the problem in another ‘more abrupt’ way and they got ahead of us,” the researcher Thiago Borges Conforti, a member of the foundation, laments to MRT.

Experts are sure that the ending of ‘Mask’ could have been different “if the murderer had a greater sensitivity to the benefits of living in contact with the Atlantic Forest and the responsibility of not damaging the natural balance of these areas.”

In the last ten years, five jaguars have been found killed by hunters in Continuous Serra de Paranapiacaba. A number “disproportionate” for a species classified worldwide as “near threatened” and in Brazil as “vulnerable to extinction”.

It is estimated that in the entire biome there are about 300 jaguars, a number that is decreasing due to the loss of their habitat, conflict with humans and illegal hunting. Since September 2020, the ICMBio team has only detected six felines in this area, including ‘Mask’.

The foundation warns that the Paranapiacaba conservation unit is one of the last three areas of the Atlantic Forest where there are jaguars that could survive in the long term, but hunting – mainly of females – poses a serious threat.

If hunting reaches 10% of these animals, it is estimated that in less than 100 years there will be none left in this region, and if that species disappeared, a whole ecological imbalance would occur when it impacted the fauna and flora.

Since September 2020, ICMBio researchers have located only six jaguars in Paranapiacaba, one of them was ‘Mask’, which apart from the injuries he suffered, was completely healthy.

The Police are looking for the person who ended his life. The sentence can be from six months to a year in jail, with a fine.