“75% of vaccines have been administered in only 10 countries”: WHO declares that “the pandemic will end when the world decides” 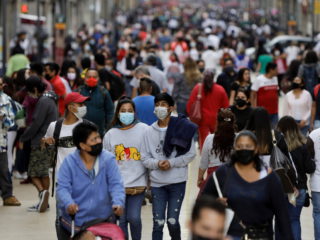 Many wonder when we will live in a world free of covid-19 again, and although there are now several tools to make this wish come true, governments and companies do not do enough, declared the director general of the World Organization of the Health (WHO), Tedros Adhanom Ghebreyesus, during his speech at the 138th session of the International Olympic Committee.

“The pandemic will end when the world decides to end it”, asserted Tedros, recalling that “75% of vaccines have been administered in only 10 countries” and that “the reason why we did not finish [con la pandemia] it is the lack of a real political commitment. “

“We have all the tools we need: we can prevent this disease, we can do tests to detect it and we can treat it,” stressed the WHO director general, recalling that “this is more than we have for many other diseases.” “There is no vaccine for HIV, there is no cure for Alzheimer’s disease, there is no simple test for all forms of tuberculosis, and the list is very, very long,” he noted.

“It is a pandemic whose course is largely under our control. We have the tools to prevent transmission and save lives. We can choose to end the pandemic.”

Meanwhile, the WHO urges mass vaccination against the coronavirus and insists that the common goal should be to vaccinate at least the 10 % of the population of each country by September 2021, by 40 % by the end of this year and at 70 % by mid-2022.

In his speech, Tedros stressed that “each government must commit to protect its population with a set of appropriate and coherent social and public health measures” and regretted that investments in anticovid measures are “a fraction of what is invested in defense to kill people. “” If nations can mobilize the power of industry for war, why can’t they do the same to defeat this common enemy? “he asked.

He also lamented the global inability to share vaccines, tests and treatments, including oxygen, recalling that in low-income countries “only 1 % of the population have received at least one dose “of the anticovid vaccine while” some of the richest countries are now talking about third booster shots for their residents.

“The tragedy of this pandemic is that it could already be brought under control if vaccines had been distributed more equitably. The distortion in the manufacture and distribution of vaccines has exposed and amplified the sharp inequalities that have tainted the history of the humanity, “Tedros said.

In his opinion, companies that manufacture vaccines, tests and treatments “also have the social responsability to make sure those tools are available to everyone who needs them, anywhere, “and many companies have failed to meet their dose-sharing commitments.

Are needed 11 billion vaccines to immunize 70% of the population of each country by the middle of next year, and that goal requires a drastic increase in production. “There are many ways to increase production, such as sharing knowledge and technologies with other companies with production capacity, or waive intellectual property rights on certain products during a certain time “, suggested the director of the organism.