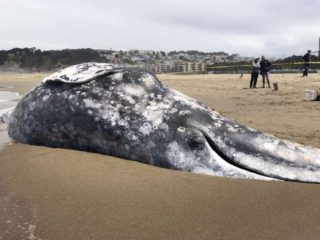 Gray whales often traverse the San Francisco Bay Area in the United States during their migration north to search the Arctic waters from late March to April. It is not unusual for some of them to die and be found in the North American beaches during the spring of the northern hemisphere.

But one of them appeared in the region later than usual and is joining a staggering number of gray whales killed in less than three months. There were 14 of them since April 2021 alone, according to the Marine Mammal Center.

“In 2019, when this unusual mortality event began, we had 13 dead gray whales“, He said Giancarlo Rulli, spokesperson for the center. “Last year we had five. In an average year, we and our partners at the California Academy of Sciences respond to between five and ten dead whales of all species in a given year ”.

Malnutrition, entanglement and trauma from boat crashes are the most common causes of death in whales identified by the center’s researchers in recent years.

Scientists from the Center and the California Academy of Sciences performed a necropsy on the whale found on Sunday, and the sample was identified as a female with average fat reserves. They were unable to determine the cause of death, but they made several other observations that may provide clues as to why the animal did not survive.

This whale was fresh based on the quality of its skin, internal tissues, and organs. While the scientists found fractured spinal vertebrae, “lack of bruising and bleeding in nearby tissue indicates that the animal was likely hit by a boat after he had already died from another cause, ”said the center.

The research team noted that the whale had an almost empty stomach and it is puzzling why this adult female was migrating north into the cold food-rich Arctic waters this late this season.

Gray whales with calves tend to migrate later in the season, according to specialists at the center, but this mammal did not show any signs of having recently suckled its young.

“We are hopeful that the samples taken during the necropsy will shed some light on the reasons behind his late trip north and any possible ailments that may be affecting the gray whale population”, Moe Flannery, Senior Manager of Bird and Mammal Collections for the California Academy of Sciences, said in a statement.