A baby and his father die after shooting attack in Zacatecas 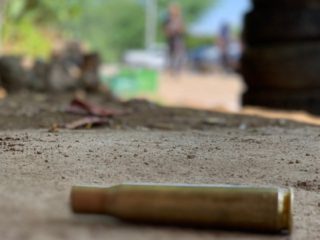 The afternoon of this Sunday there was a shooting in a COVID-19 vaccination center, located in the Buenavista de Trujillo community within the municipality of Fresnillo in Zacatecas; a man and his baby passed away in the attempt.

According to witnesses, victims they were at aboard a van when several men they shot them, while the elderly, who were trained to receive the vaccine, had to throw their chest to the ground and took cover under some tables of food stalls and parked vehicles.

Despite the fact that several nurses from the COVID-19 vaccination center approached to help the victims, the man died at the scene of the events, while the minor was transferred to the Fresnillo hospital where he lost his life later.

There were elements of the National Guard at the vaccination post, but, according to witnesses, they did not act against the attackers, who fled without initiating a chase. Several other vehicles were hit by a firearm.

After the armed attack, the vaccination process was interrupted and resumed half an hour later. Some older adults had nervous breakdowns, so they had to leave the place without being vaccinated.

The health authorities announced that an extraordinary day will be held tomorrow to conclude the vaccination process for people who no longer received their corresponding dose.

As we have mentioned in other informative notes of The Truth NewsAccording to authorities from the Ministry of Health, currently in Zacatecas there are a total of 30,239 people affected by the new coronavirus since the first positive, according to the latest official data for May 8.

In addition, the region did not register any new deaths from coronavirus in the last day, so it continues with 2,762 deaths since the beginning of the pandemic.