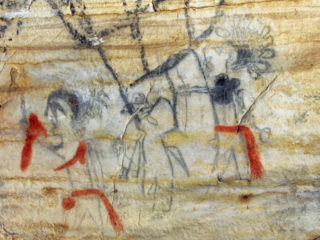 A cave in the US state of Missouri that contains Native American artwork from more than 1,000 years old, it was sold this Tuesday along with 17 hectares of hills that surround it near the city of Warrenton, in the east of the state, in an auction for $ 2.2 million.

The sale of the place, known as ‘Cave of Images’, has generated great disappointment among the native leaders of the Osage Nation, who they rated selling “truly heartbreaking” as they hoped to buy the land for “protect and preserve a sacred site“for them, since it was the place where rituals were held and the dead were buried, according to a statement quoted by AP.

Missouri’s Native American Picture Cave Is About to be Auctioned Off!https://t.co/yD0fnLPWqVpic.twitter.com/6lhrcEkIiy

According to the auction company, Selkirk Auctioneers & Appraisers, the site has more than 290 prehistoric glyphs, “making it the largest collection of indigenous peoples’ polychrome paintings in Missouri.”

Likewise, researcher Carol Diaz-Granados opposed the sale of the cave, assuring that it is distinguished from other places with ancient drawings due to its complex details. “In the ‘Cave of the images’ there are details of the clothes, the headdress, the feathers and the weapons. It is really surprising,” he said.

For his part, Bryan Laughlin, director of the auction company, mentioned that there are many reasons to believe that the cave will continue to be protected and respected, as the law prohibits the destruction, vandalization and knowing damage of a human burial place marked or not. marked, as well as criminalizes the use of cultural objects obtained in the place.