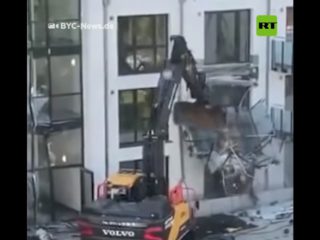 On Wednesday, a contractor used a backhoe to destroy parts of the facade of a 30-story residential building in the German municipality of Blumberg, Baden-Württemberg, before voluntarily surrendering himself to the authorities. collect local media.

Motivated by the lack of payments, the worker leased the heavy machinery and proceeded to use it to cause significant damage to the complex’s facade, destroying balconies, windows and other structures, including warehouses where gas tanks were stored, causing damage valued at more than half a million dollars.

Once the individual ‘vented’ his discontent against the property, he boarded his car and went to the local police station to voluntarily surrender to the authorities and take responsibility for his acts “of frustration,” said the police spokesman.

Currently, engineers continue to evaluate if the building’s statics were compromised, so it is not ruled out that it has to be completely demolished, situation That would significantly raise the cost of the damage caused.

So far, the subject faces charges for damage to private property; However, the defendant assures that the building still belongs to him since the work has not been completely liquidated. If this version is verified, there would be no crime to prosecute, authorities commented.