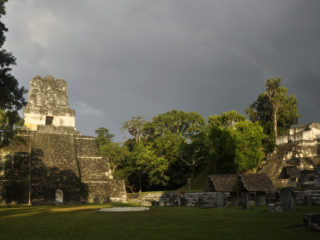 Deep in the rainforests of northern Guatemala is the ancient Mayan city of Tikal, a bustling metropolis that a thousand years ago comprised roads, paved plazas, towering pyramids, and temples and palaces, plus thousands of homes for its residents. , all supported by agriculture.

To all this, researchers from the University of Cincinnati (USA) now add that the Tikal reservoirs, vital sources of drinking water for its inhabitants, were lined with trees and wild vegetation that would have provided not only sustenance but also natural beauty in the heart of the busy city.

Within the framework of their study, the results of which were published in the journal Scientific Reports, North American specialists developed a novel system to analyze the DNA of ancient plants found in sediments from the reservoirs of the temple and the palace of Tikal.

Their findings paint the picture of a wild and lush oasis: they identified more than 30 species of trees, grasses, vines, and flowering plants that lined the banks of streams more than 1,000 years ago.

David Lentz, a paleoethnobotanist and principal investigator of the study, detailed to Science Daily that the results of DNA sequencing showed that most of the center of the city of Tikal was paved and had lush vegetation. He added that due to the high temperatures, it made perfect sense that the city had “nice and cool places” next to the reservoir.

Nicholas Dunning, co-author of the study, added that since the Maya was a forest culture with a cosmology that included multiple elements related to forests, the sacred groves adjacent to the spring and its pond, in the heart of the city, were a powerful symbol of his deep respect and consideration for nature surrounding.