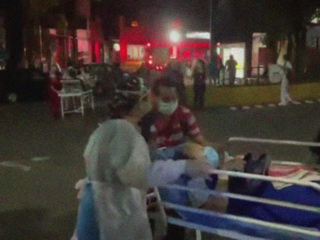 An adult and a child died on Sunday as a result of a fire that was registered in an intensive care unit (ICU) of the Villavicencio Departmental Hospital, in the Colombian department of Meta.

In this event, the adult died while being transferred by ambulance to another healthcare center and the four-year-old child is only known to be in the pediatric ICU of the hospital, without further details.

The fire was controlled and 27 adult ICU beds and 10 pediatric ICU beds were disabled. The causes are still unknown but, according to one release of the Meta governorate, “apparently the conflagration occurred in a biomedical team,” so the state of the equipment at the accident site will be verified.

After the fire, 259 patients were evacuated to expansion areas and 49 transferred to other clinics. In addition, a red alert was declared in the departmental hospital center, the government added.

#Extension More than 35 patients have been evacuated from the Villavicencio Departmental Hospital after a fire that occurred in the last hours. The fire was already controlled by the fire brigade #VocesySonidospic.twitter.com/NdGBqfSSYD

Previously, Civil Defense had reported on its Twitter account that 30 patients and 150 hospital workers had been evacuated to the sports center of that institution. 13 volunteers participated in the action.

The patients in the most delicate condition were taken to other health centers “to save their lives,” added Civil Defense.

#Meta, due to structural fire in the respiratory ICU of the @hospvillavo, the @DefensaCivilCo supports with two ambulances and 13 volunteers who have helped evacuate 30 patients to the Hospital sports center and more than 150 workers from the same hospital. pic.twitter.com/gcM8oaS5TH

This Monday, the governor of Meta, Juan Guillermo Zuluaga, made a tour to assess the damage to the facilities of the department’s care center.

At this time the governor of Meta @JuanGZuluaga tour the facilities of the Villavicencio departmental hospital after the serious fire last night. It also coordinates the operation to attend medical emergencies and transfer patients to other cities. pic.twitter.com/eMMHc2GFLE

The mayor of Villavicencio, Felipe Harman, reported that to focus on health care, it was decided reduce 50% of bed capacity available at the hospital, so the emergency department is closed “preventively”. This represents a deficit of 100 beds.

For this reason, a curfew was decreed from Monday to Wednesday, from 10:00 at night to 5:00 in the morning, and dry law. “We don’t have room for a traffic accident, for a fight, so we ask the citizens for their full cooperation “.

According to the hospital manager, Maryuri Diaz Céspedes, the fire disabled the highly complex and emergency area, pick up Periódico del Meta, so the triage, outpatient and surgery areas will not be in operation either.