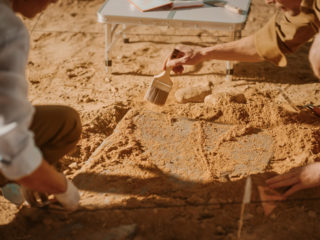 Specialists at the University of Warsaw, in Poland, decided to study the strange burial of a girl with a finch in her mouth, found during excavations between 1967 and 1968, but the results of the investigations have not been able to answer the questions of archaeologists Until now.

For many years, scientists have tried to solve the mystery of the minor’s remains, discovered by archaeologist Waldemar Khmelewski in the southern European country in the Tunnel Wielki cave, but now with the help of new technologies they have managed to obtain more information.

Radiocarbon dating revealed that the girl died about 300 years ago, according to the article published in the magazine Prehistoric Journal. However, this puzzled the researchers, because the inhabitants of Europe stopped burying their dead in caves during the Middle Ages. Furthermore, the presence of a bird’s head in its mouth is also unusual, and no other similar cases from this time are known on the continent, the authors wrote in their article.

This girl was found buried in a cave with at least one finch in her mouth in 1960. Discovered by archaeologist Waldemar Chmielewski in south Poland in Tunel Wielki Cave during excavations in 1967 & 1968. (Image credit: Archives of Faculty of Archaeology, Warsaw University). pic.twitter.com/zPmdwveTjv

After performing an analysis of the skeleton, the specialists determined that the minor died when she was between 10 or 12 years old. His bones showed signs of slow growth, which could have been a consequence of a metabolic disease. The scientists found no traces of trauma or other clues to the causes of his death.

The team also conducted a series of scientific tests and examined the historical records. DNA tests indicated that it could come from an area in northern Poland, possibly from present-day Finland or Karelia (Russia). According to historical records, the area was occupied by an army led by King Charles X Gustav of Sweden between 1655 and 1657, whose soldiers often traveled with their families. According to specialists, they they had a habit of burying people in a forest.

In this way, the researchers suggested that the girl may have arrived in the area during the war of 1655-1657 with her family and died at the site of natural causes. Therefore, she was buried in a cave in the forest near Ojców Castle that at that time served as a military hideout.

However, it is still unknown why she was buried with the head of a finch in the mouth. So far, specialists have not yet been able to find any historical evidence in this regard.