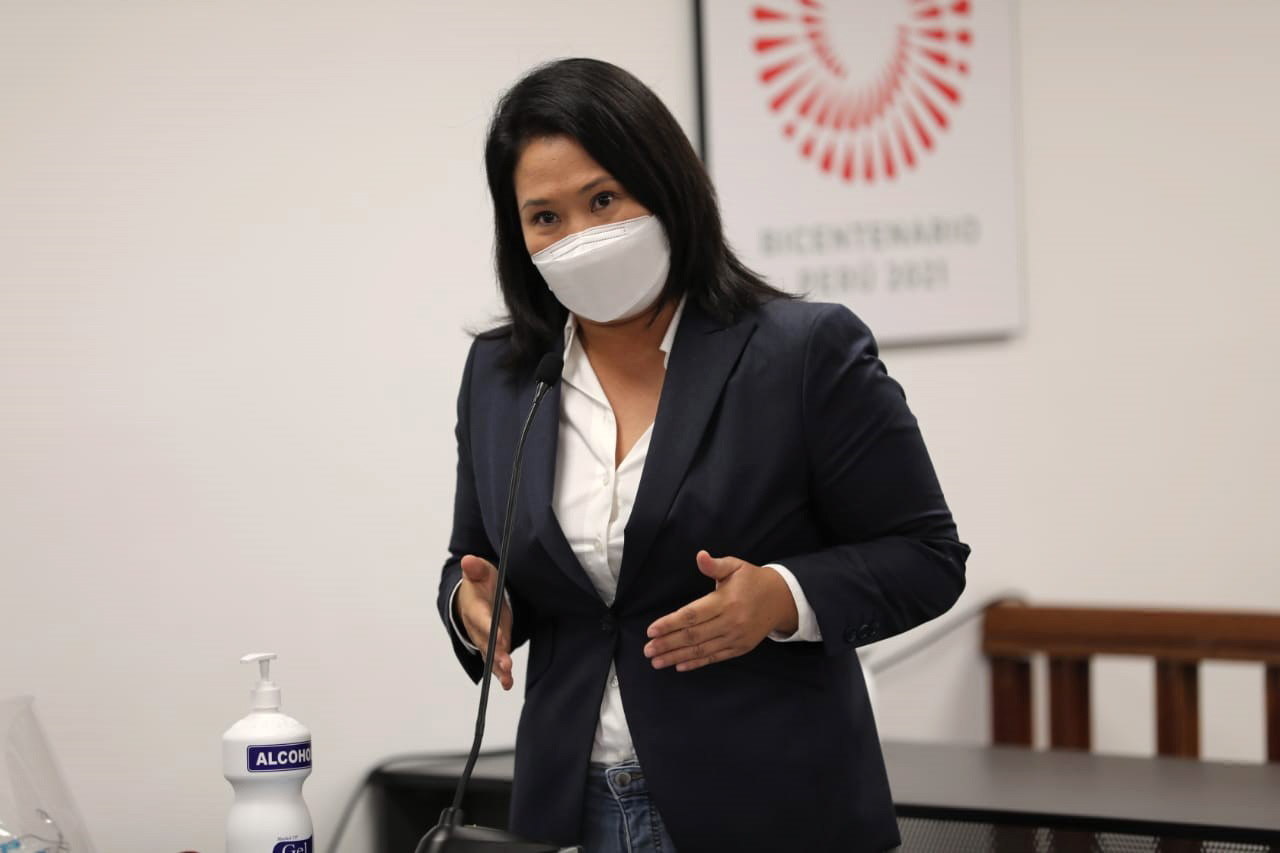 A judge allows Keiko Fujimori to remain on probation

The Peruvian justice system has rejected this Monday the request for preventive detention for Keiko Fujimori, amid the tension after the presidential elections on June 6. The candidate, accused of money laundering and criminal organization in the Odebrecht case, still does not recognize the electoral victory for the minimum of his adversary, the leftist Pedro Castillo.

However, the preparatory investigation judge Víctor Zúñiga demanded that Fujimori not communicate with witnesses and more than 30 co-defendants in the file for money laundering, organized crime and obstruction of justice, after verifying that he broke said condition of liberty guarded. He warned her that if she did, she would return to preventive detention, in which she was until April 2020, when she was released due to the pandemic.

The leader of Fuerza Popular appeared on June 9 in an activity broadcast live by the press with the former congressman of her party Miguel Torres. He introduced him as a political spokesman when they announced the presentation of hundreds of requests to nullify voting tables in which his adversary Castillo, a rural professor, won.

The Peru Libre candidate outperformed Fujimori by more than 40,000 votes in the official vote, and since the day after the ballot, Fujimori has argued without presenting evidence that there was fraud at the voting tables.

The Prosecutor’s Office charged in March the eldest daughter of the autocrat Alberto Fujimori for having received – and not having declared to the electoral authorities – 1.2 million dollars in contributions from the Brazilian transnational Odebrecht for his presidential campaigns in 2011 and 2016, as well as hundreds of thousands of dollars from other Peruvian economic groups.

The candidate, her main advisers and party leaders, in addition, circumvented the regulations of the Peruvian financial system by simulating small deposits in her party’s bank account, as if they came from ordinary citizens, when they were laundering the money delivered by the companies.

The provincial prosecutor José Domingo Pérez asked the judge to vary the probation with rules of conduct to preventive detention after all the television channels showed Fujimori with Torres, one of the witnesses in the case known as Cocteles-Lava Jato, at the same table. .

The conservative leader said for several years that her party raised funds for the campaign by selling tickets to cocktails in which she and her husband participated. Pérez, a member of the Lava Jato Special Prosecutor’s Team, thwarted this version during dozens of court hearings in which he presented the bank deposit vouchers of simulated contributors and the testimonies of the businessmen who delivered the money.

Fujimori and his lawyer, Giulliana Loza, rejected the prosecutor’s request, arguing that the standard of conduct established by a criminal court indicated that the prohibition of communication was only with contributing false witnesses, and that Torres did not have that condition. However, the document of the Superior Criminal Chamber only mentions as exceptions the mother and two brothers, among the witnesses, and the husband and his lawyer among the co-defendants.

During the hearing, the prosecutor Pérez affirmed that the defendant exhibited “defiant conduct” since she not only served with Torres publicly in June, but also with the lawyer and former presidential candidate Lourdes Flores Nano, another witness in the same Cocteles-Odebrecht case. . Flores Nano is also being investigated in another case for having received contributions from the same Brazilian construction company for its electoral campaign in 2006.

Pérez recalled that in May and July of last year he informed the judge that Fujimori had already violated the rules of conduct when meeting with other witnesses, two former congressmen from his party, and therefore requested a warning. Judge Zúñiga verified that he never responded to these requests because they arrived at his office during a two-month interruption in the process, in one of the 14 challenges filed against him by the lawyers of the Fujimori defendants. In support of the decision, the magistrate explained that the exceptions were due to family and professional ties, but not to the condition of witness related to simulated contributions.

“Knowing (Fujimori and his defense) that (Torres and Flores Nano) are witnesses, they should not have communicated. I demand that Mrs. Keiko Fujimori strictly comply with all the restrictive measures imposed by means of a resolution of the Second Criminal Appeals Chamber of April 30, 2020. If she does not do so, preventive detention will be issued, upon request of the Public Ministry, “the judge later stated. from an audience of just over two hours.