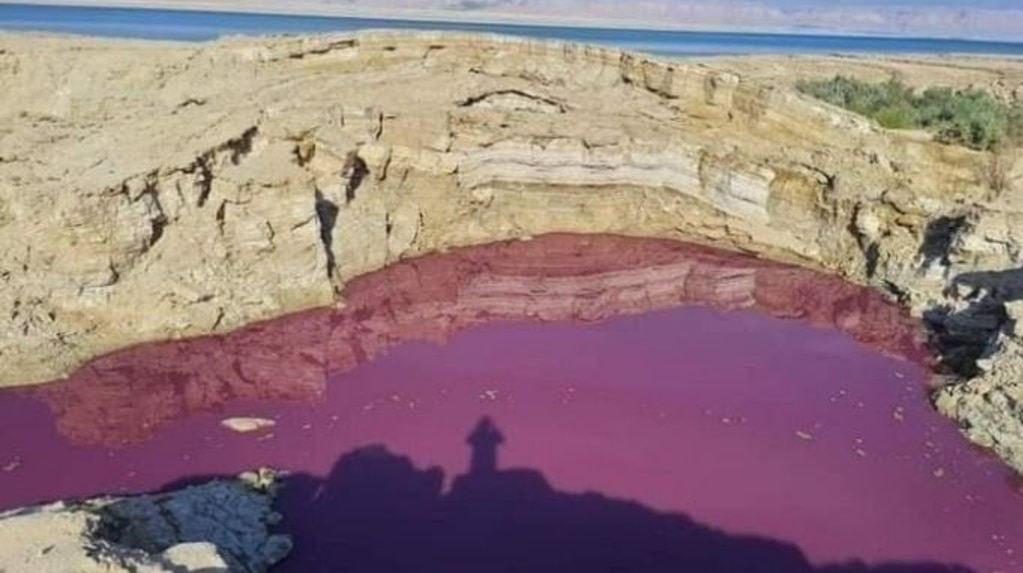 According to the biblical account, in ancient Egypt and as signs and warnings for Pharaoh to free the Hebrew people – whom he kept as a slave – God sent Ten plagues. This is what is known as the ‘biblical plagues’, which included everything from diseases and pests to an invasion of locusts. One of them was the conversion of river water into blood.

Taking into account this biblical passage, what happened a few days ago in the region of Moab (Jordan) became something very striking. And there were those who linked him with the reincarnation of the first of the ten plagues.

And it is that a water mirror in the area was dyed red, something that was baptized by the locals and by people from all over the world who were surprised by the news as a “Lake of blood”. However, the sanitary and technical authorities of this country indicated that they have already taken samples of the water and sent them to be examined, although the results are not yet available. However, they asked people to wait for confirmation and deal with accurate and scientific information, leaving aside questions of belief and false news.

After the first inhabitants of the area discovered this strange phenomenon that dyed the color of the water of this lake red, in the social networks the photos did not take long to go viral. And even media from the region and from different countries came to that point in Moab to verify with their own eyes – and cameras – the atypical situation.

The first news about water pigmentation dates from last September 11. Specifically, it is an isolated natural lake that is located in the immediate vicinity of the Dead Sea, near the mountains. Ghor Al-Hadeetha. It is this mountain range that usually feeds this pond and, although it is not 100% crystal clear water, it is not reddish water either.

First on social media and then on traditional media, the shocking and surprising postcards soon spread and went viral all over the world. Given the coincidence with the biblical account, some theories that emerged revolved around the apocalyptic.

Being in the Bible the conversion of water into blood, the first of the plagues, there were many who stood out and spread the word that it was “the beginning of the end” and that, from now on, the remaining nine would happen until the ten plagues were completed. Even the versions related to the arrival of the end of the world were not lacking either.

However, more measured and clinging to the empirical and science, other users asked to wait for the results of the studies before drawing conclusions about the reason why the water was stained red.

Although the Jordanian authorities were in charge of sending a specialized team to the area to take samples of the water and try to confirm the cause of this atypical phenomenonSo far there is no confirmed result or preliminary indication.

As a hypothesis, and because it is not the first time that a situation of this type has been observed -although it had never been seen in this water mirror- referents of the Jordanian Union of Geologists explained that it is very likely that the water is has stained red as a result of the oxidation algae, iron oxide or the addition of some substance by people.