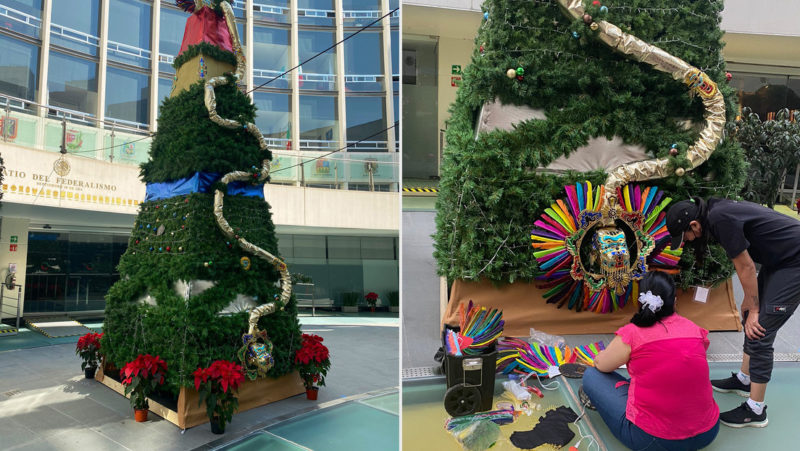 Instead of a star, a plume, and replacing the traditional balls, the body of the mythical serpent of the god Quetzalcóatl, which descends to the ground. That was the decoration chosen for the Christmas tree in the Patio del Federalismo of the Senate of Mexico, a fact that caused a barrage of criticism from the right in that country and many memes on social networks.

The tree’s designer, who wanted to remain anonymous, said, speaking to Millennium, that the idea was to “juxtapose” the concept of Christmas with the “supreme pre-Hispanic god, Quetzalcóatl.”

The Christmas tree of the @senadomexicano It’s the scariest thing we’ve ever seen… If they wanted to represent Quetzalcóatl’s yoke on Christmas and / or Western culture (yes, what looks like a fourth-grade masonry pipe tries to be the feathered serpent), they got it well and pretty. pic.twitter.com/DbwFmpZ4lg

He also recalled that, according to myth, Quetzalcóatl became a star with the promise of returning one day. And, in his opinion, therein lies the similarity with Christmas, where the star of Bethlehem guides the Magi to the place of the birth of Jesus Christ.

In his opinion, Quetzalcóatl “was our Jesus and Jesus was our Quetzalcóatl.” “Our culture breaks when the Spanish arrive,” he told the outlet.

But the designer’s idea to mix both traditions unleashed quite a general dislike on social networks, especially from spokesmen for the Mexican right.

Juan Pablo Adame Alemán, technical secretary of the senators of the National Action Party (PAN), commented: “The terrible taste has already reached the Senate, just see the Christmas tree they prescribed for us.”

Friends, they are already putting more colorful feathers on the Christmas tree of the @senadomexicanopic.twitter.com/GJ3pqshB8D

Lilly Téllez, PAN Senator, assured that the tree is a “faithful portrait of Morena[NationalRegenerationMovement”inanattempttouglytheleftistpartytowhichPresidentAndrésManuelLópezObradorbelongs[MovimientodeRegeneraciónNacional”enunintentodeafearalpartidoizquierdistaalqueperteneceelpresidenteAndrésManuelLópezObrador

But the ruling party did not take the criticism to heart, but even agreed on the remarks about the failed attempt at decoration. In statements to the press, Senator Ricardo Monreal recognized with laughter that the tree “is ugly.” “No good, Well, there is no money. It has to be redone. At the request of the press we are going to remake it, “he added.

The memes about the controversial tree were not lacking either.

The designer of the Christmas tree of the @senadomexicano He defends that Quetzalcóatl coincides in due time and form with Santa Claus and the Tree that celebrates Christmas, of German and Nordic origin. How to explain to him that there is no relationship whatsoever? pic.twitter.com/70sZb7MG0b

The ugliest tree I have ever seen! pic.twitter.com/6tA3yh8cJd

Meanwhile the Christmas tree that they put in the Senate: “I am not a Christmas tree, I am a monster.” pic.twitter.com/aiQ4tTWi48