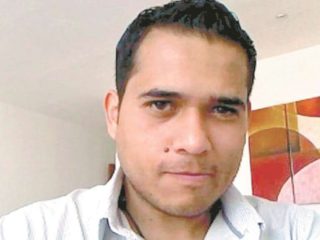 Radio journalist Abraham Mendoza was murdered in the parking lot of a gym on Madero Poniente Avenue, in the city of Morelia, Michoacán. According to witnesses, he was intercepted by attackers who shot him at point-blank range. The attack also wounded a Hawker, who was hit by a lost bullet when the attackers fled aboard another vehicle ..

State police arrested three suspects by the attack. They were brought before a judge and will likely be charged with aggravated murder. Investigators have not yet determined the motives and do not rule out that this attack could having been related to journalistic work of Mendoza.

Since 2013, the journalist served as the main director of Informative Magazine Voces Radio and was an active contributor to his alma mater, the Basque University of Quiroga (UVAQ). He also had a radio station on the chain EXA in Morelia.

// Commotion in Guadalajara: a woman made her boyfriend believe that they were going to look for treasure in a cemetery, but ended up murdering him

“The university community unites in prayer for the sensitive death of our collaborator and friend, the journalist Abraham Mendoza. Peace and quiet for your family and friends. Rest in peace, “published the UVAQ on Facebook.

The Governor of Michoacán, Silvano Aureoles, condemned the murder in a Twitter post and said local authorities were investigating. He indicated that he trusts that those responsible for Mendoza’s death will face justice.

Mexico is one of the most dangerous countries in the world to practice journalism as a profession. Although the figures are often contradictory, press freedom organizations agree that more than 150 journalists they have been murdered in Mexico since 2000. Dozens more are still missing.

// A man spent 21 years in prison for a crime that never happened: the alleged victim lived in the United States

Reactions to the death of Abraham Mendoza

Reporters Without Borders (RSF) published a statement on its website calling on the authorities not only to condemn these types of crimes, but also to carry out an investigation that leads to finding those responsible. “With at least three journalists already murdered this year in Mexico, How many more victims will it take before authorities finally take bold steps to protect media workers?” I ask Emmanuel Colombié, director of the office of RSF for Latin America.

“The Michoacán Prosecutor’s Office and the Local Police must carry out an exemplary investigation into the murder of Abraham Mendoza and must not rule out any hypothesis, including a possible link with his journalism.”

For its part, the Attorney General of the State of Michoacán (FGE), in western Mexico, maintains as its main line of investigation the information activity in the murder of the Mexican journalist and broadcaster. “The research protocol itself It obliges us that from the first moment the perspective of the investigation is approached around journalistic activity“Said the Michoacan prosecutor at a press conference on Tuesday Adrián López Solís.

The Inter-American Press Association (IAPA) condemned the journalist’s murder on Tuesday and urged the authorities to “thoroughly investigate the crime to find out the motive and identify and prosecute those responsible.”

The journalist and broadcaster Abraham Mendoza led the informative program Observatory in the station of the Basque University of Quiroga, Uve Radio, in which, according to local media, he criticized the President’s Government Andrés Manuel López Obrador.

Former Mexican President Felipe Calderón posted on his Twitter account: “Another journalist assassinated… Rest in Peace Abraham Mendoza and may justice be done. That is what they should dedicate public money to, to strengthen police, prosecutors and courts. Not to Gansito consultations or to baseball stadiums ”.