A minimum gap for a long challenge: the four points that explain the complicated scrutiny of the presidential elections in Peru 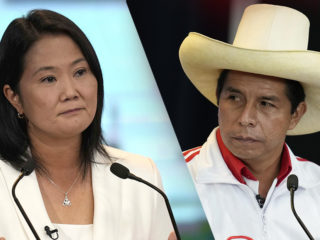 Although the National Office of Electoral Processes (ONPE) has already counted more than 99% of the votes, the proclamation of the winner of the presidential ballot in Peru will not be immediate, since the close count between the leftist Pedro Castillo and the rightist Keiko Fujimori promises a last minute ending.

In the final stretch of the scrutiny, which for now gives Castillo a slight advantage (50.20% of the votes), a series of complaints have come out from the Fujimori team for alleged irregularities in the minutes, as well as judicial resources that persecute the standard-bearer of Fuerza Popular, accused of corruption crimes for alleged money laundering.

In parallel, Castillo has already come out to proclaim himself the winner, which has further strained the political landscape in the country. While the sectors that support the aspirant of Peru Libre remain in the streets to “enforce” the results, Fujimori is committed to pushing a long process of challenges. What to Expect

On Wednesday, the leader of Fuerza Popular led a press conference to expose the alleged irregularities that her party would have detected during the vote count. The person in charge of making the presentation was Marcos Torres, former congressman and current legal representative of the political space that brings together Fujimori.

In his presentation, Torres assured that they detected anomalies in 802 polling stations throughout the country, such as the alleged falsification of signatures, the alleged alteration of results or the repetition of the same last name among voters, which in the opinion of Fujimori, would indicate that they were familiar.

The common factor of the tables observed by Fujimori is that Castillo won at those. There would be no challenge to the voting centers where the standard-bearer of Fuerza Popular prevailed with a majority of the votes.

“These minutes represent approximately 200,000 votes. When received, shall be removed from the final count“Keiko Fujimori said during the appearance before the press. The challenge made by his party is crucial to put a brake on the proclamation, since the difference between the two candidates, for now, is just over 70,000 votes.

Fujimorism, meanwhile, maintains a campaign on its social networks to ask that they send complaints about other alleged irregularities in the rest of the country, while some militants of Peru Libre have come out to deny some of the anomalies attributed to their voters, to through those same platforms.

This Thursday another crucial element was added to the controversy: one of the prosecutors of the team investigating the Lava Jato case requested the revocation of the restrictions on the Fuerza Popular candidate and requested the imposition of preventive detention.

The reason for this request is that Fujimori violated the rule that prevented him from maintaining contact with the witnesses in the case that follows, for alleged money laundering in the presidential campaigns of 2011 and 2016, including lawyer Marcos Torres.

Prosecutor José Domingo Pérez made the request before the judge Víctor Zúñiga Urday, adding in the file the screenshots that show Torres with the Fujimori candidate, during the press conference offered on Wednesday to challenge the results in the 802 polling stations.

“Being in breach of the rule of conduct that obliges not to communicate with the witnesses of the process, is that I request (…) that the appearance be revoked with restrictions and that preventive detention be issued again against the accused,” says the document that it was released by local media. In this case, the prosecution requests a 30-year prison sentence for the standard-bearer of Fujimori.

After hearing the petition, Torres assured that he was not a witness to the Cocteles case, as the case that follows Keiko Fujimori is known, for the illegal contributions that his party would have received from Odebrecht to finance its campaigns.

“I’m sorry that the prosecutor confuses things, I am not a witness to the contribution case, Nothing like that. I have attended the prosecution for totally different issues “, declared Torres to the middle RPP. Fujimori has already been in preventive prison for that cause, which is followed because he could not justify 75% of the money raised in the ‘cocktails’ that his party organized to raise funds.

The prosecution accuses the candidate of being the alleged leader of a criminal organization, hatched in order to launder the illegal money that she would have received from the Brazilian company, through alleged ‘contributions’ from family members and members of her party.

Meanwhile, Castillo has played an advanced position. The unexpected candidate who reached the second round amidst the surprise of all the pollsters, asked for calm before the first scrutiny – which gave Fujimori the winner – and waited until he passed her by a narrow advantage.

On Tuesday, when the trend in his favor seemed to be confirmed, he proclaimed himself the winner of the elections before the official pronouncement of the ONPE. In a speech in front of his followers, the leftist promised “a government with financial and economic stability“and respectful of the current Constitution.

However, the tension persists. For this reason, the Peru Libre candidate called on his supporters to “do not fall for provocation” already “be attentive“to defend democracy”, after asking the electoral institutions not to “sully the will of the people.”

Meanwhile, Fujimori supporters called for a march yesterday towards the headquarters of the Joint Command of the Armed Forces, in Santa Beatriz, Lima, amid continuous calls for a military intervention in the event that Castillo’s victory is declared. However, the Ministry of Defense itself issued a release on Wednesday to reaffirm “the commitment to respect the citizens’ will expressed at the polls on June 6, as appropriate.”

4. The market and Parliament

This week, amid the uncertainty about the results, the Lima Stock Exchange suffered a collapse, as did the sol, the national currency, which fell 2.4% against the United States.

Castillo considered that these market actions are a “trip”, but assured that he has received the support of “personalities from different countries” and embassies in Peru who have expressed their “greetings and appreciation.” This Thursday, in fact, the president of Argentina, Alberto Fernández, was the first to recognize him as elected president of the Andean nation.

However, the pitfalls in the face of an eventual victory for the left in Peru would not be solely economic. The current acting president, Francisco Sagasti, denounced yesterday that his “concern about the hasty constitutional reforms that Congress intends to approve in the 3 days of Plenary that remain of the third ordinary legislature.”

Apparently, Congress seeks to expressly approve modifications such as the parliamentary bicamerality, which would affect 65 articles of the Constitution, as well as the expansion of relations between the Executive and the Legislature.

In Sagasti’s opinion, the alleged modifications “would further weaken the powers of the Executive Power before Congress, breaking the balance of powers.” “In a period of 28 years, 24 constitutional reforms were approved. Now, in a few days, it is intended to approve more than a dozen reforms, without respecting the spirit of Article 206 of the Constitution, which implies a deep debate and wide acceptance of its content, “warned the outgoing president, who will surrender the post after a turbulent period of government that saw four presidents pass.