A new adventure arrives in the post-apocalyptic world of Okomotive 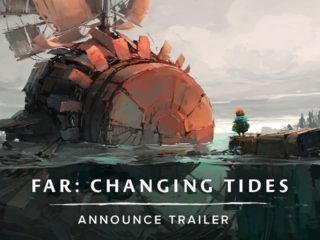 On a journey from the sand dunes to the waves of the sea, FAR: Changing Tides expands the inhospitable world created by the developers, Okomotive, in its award-winning first installment, FAR: Lone Sails. Players will be able to control Toe, a hero trapped in waterlogged territory with little chance of survival. After finding an abandoned ship, the journey to safety will see players cross the horizon in a desperate attempt to achieve freedom, while Toe searches for answers about what happened to his home.

Okomotive Co-Founder and Design Officer Don Schmocker has stated that: “The reception of FAR: Lone Sails was impressive, knowing that people felt the same passion that we did for that world inspired us to continue working on it with Changing Tides. We knew we wanted to tell a different but complementary story that will be familiar to the fans but fresh and exciting. “

Featuring the same captivating art style, thoughtful side-scrolling gameplay, and haunting soundtrack by composer Joel Schoch you already had FAR: Lone Sails, the next installment of the world created by Okomotive will offer fans an engaging experience while sailing the high seas and exploring the deepest seabed, coming later this year.

Zac Antonaci, editorial director of Frontier, has stated: “The agreement between Okomotive and Foundry has been a wonderful moment for the team, as there is a great love for FAR: Lone Sails in the studio. What Don and the rest of the developers have created with Changing Tides is a fantastic continuation of this saga, and we are delighted to be involved in its development for fans, building on Frontier’s legacy as a developer and publisher. “

FAR: Changing Tides It will be released in late 2021 on Xbox Series X / S, PlayStation 5, Xbox One, PlayStation 4, Switch, Steam, and the Epic Store. Through this link you can already see the trailer of the ad. In addition, the game can already be included in the Steam wishlisted.