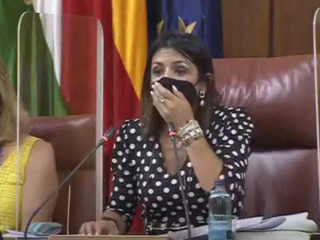 A rat sneaked into the hemicycle of the plenary hall of the Parliament of Andalusia (Spain) this Wednesday and caused panic among those present, as seen in a video broadcast on social networks which has been echoed local media.

In the recording, it is observed that Marta Bosquet, president of said organ, speaks when she suddenly notices the presence of the animal and puts her hand to her mouth, scared. Then, several deputies get up and shout for the camera. “Ladies and gentlemen, calm down,” asks Bosquet shortly after.

Faced with the widespread uproar, several parliamentarians such as Enrique Moreno and Benito Morillo have tried to capture the rodent. Finally, the vice president of the Board, Juan Marín, has managed to expel him from the place without anyone suffering harm.

“It is not the most dangerous species what’s up in parliament“, declared in an ironic tone later during an interview granted to ‘Analysis Table’, of Canal Sur, Elías Bendolo, who currently serves as counselor to the Presidency.

The incident, which has temporarily interrupted the session, has occurred While a vote was being carried out on the replacement in the group of Andalusian senators: the socialist Susana Díaz, who was president of the autonomous government, happens to take the place of the also socialist Fernando López Gil.