A study estimates that all wild boars in the world produce the same CO2 as 1.1 million cars in a year 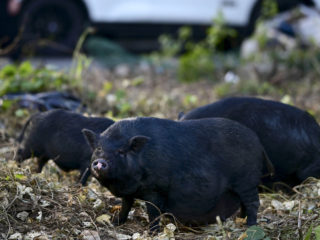 An international team of researchers has published a study in the scientific journal Global Change Biology in which they argue that the climate impact of all wild boar populations in the world is equivalent to that of the greenhouse gas emissions produced per year by about 1.1 million cars.

Wild boars, furry ancestors of domestic pigs, are indigenous to much of Europe and Asia, but have been introduced by man in other continents (such as America and Oceania) and are considered an invasive species in many countries.

“When we talk about climate change, we tend to think of the classic problem of fossil fuels,” explains researcher Christopher O’Bryan, from the University of Queensland, in Australia, aforementioned by The Guardian.

However, O’Bryan says that wild boars constitute “a potential threat” that accentuates climate change and that “it has not really been explored in any global sense.”

This is because the wild boars stir the earth while rooting, looking for food like they were mini plow tractors. By doing so, they expose soil microbes to oxygen, which “reproduce at a rapid rate and can then produce carbon emissions. [en forma de] CO2, “O’Bryan argues.

The researchers noted that Oceania had the largest land area affected by wild boars, roughly 22,000 square kilometers. This represents more than 60% of the annual emissions of the species, almost 3 million metric tons of CO2, equivalent to about 643,000 cars.

Nicholas Patton, a doctoral student at the University of Canterbury in New Zealand, says the figure could vary due to differences in carbon content in soils and the densities of wild pigs in different areas.

“The areas that are peat bogs or black soilsEspecially the ones with high humidity, they are carbon sinks, “explained Patton.” When the wild boars go in there and scavenge, there is much more potential for that carbon to be released. “

O’Bryan stresses that the negative impact of wild boars is not only climatic, but is also evident in agriculture and biodiversity.

“After all, wild boars are a human problem. We have spread them all over the world,” concludes the researcher.