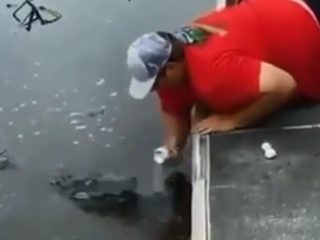 In social networks circulate a video starring a man who opened a beer can with the teeth of an alligator. The scene, captured in Florida, United States, went viral and generated controversy among Internet users.

In the recording, titled “A normal day in Florida”, you can see that a group of people go on a boat ride when one of them draws the reptile’s attention by splashing water with his hand and patting it on the top of the muzzle.

It is at this moment that the animal opens its jaw, which is used by the subject who introduced the beer can to make a hole with the alligator’s teeth. Thus, he passed the beer to another man to drink.

After its publication, the video quickly went viral and generated a wave of comments. While some users applauded the man’s ingenuity, others questioned that he may have been injured or caused damage to the alligator.

“I’m not sure drinking from a can punctured by a swamp alligator’s tooth is a very good idea.”said another Internet user, referring to the diseases that the animal could transmit.