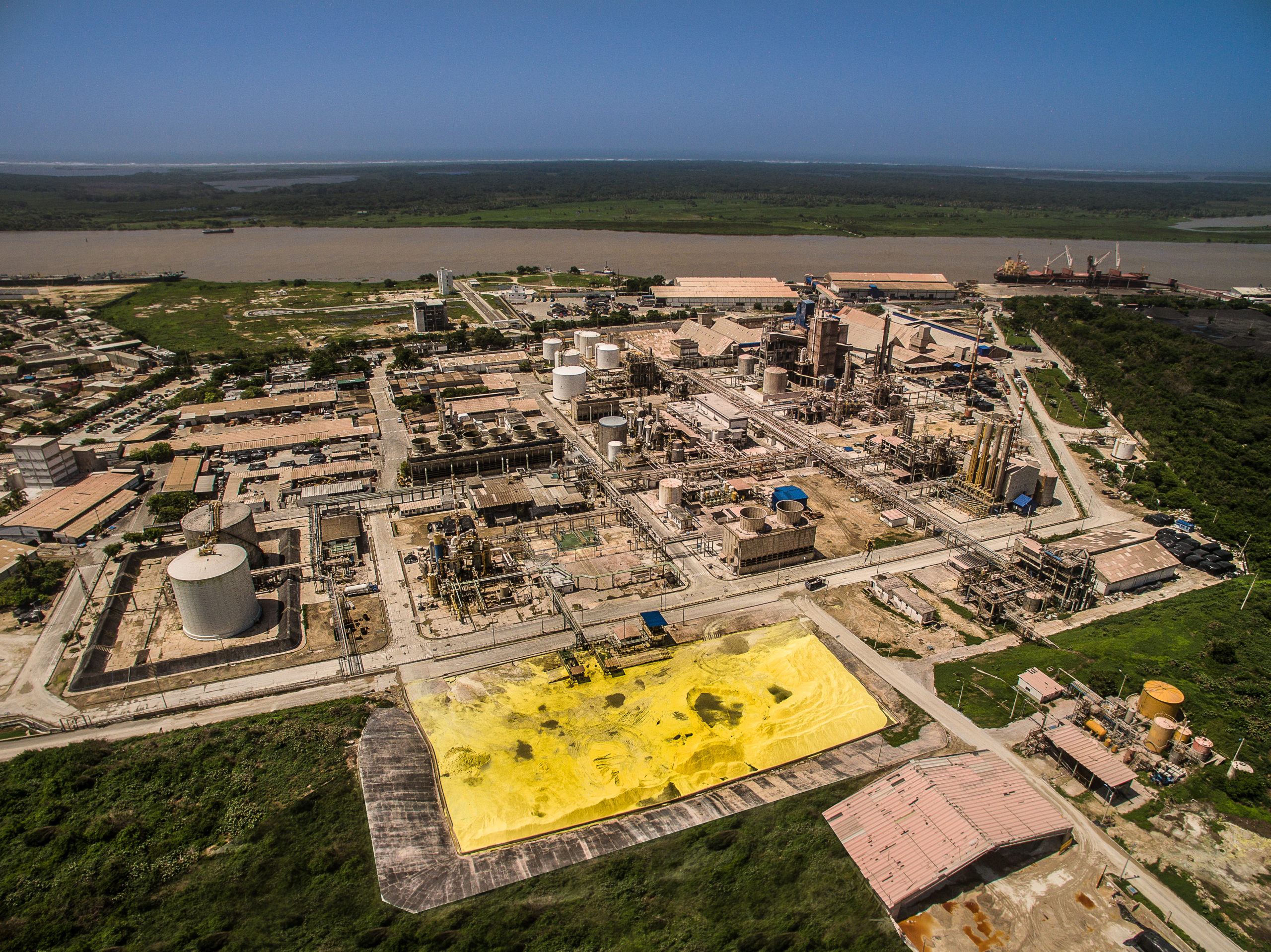 A Venezuelan company in Colombia fuels the fire of the conflict between Maduro, Guaidó and Duque

A Venezuelan company based in Colombia has become a new workhorse. The fight for control of the Monómeros company augurs a double conflict: on the one hand, between the Government of Venezuela and the opposition, which are negotiating an agreement in Mexico to overcome the crisis; on the other, between the Executives presided over by Nicolás Maduro and Iván Duque, staunch enemies who do not need much to light a burning fuse since the Colombian came to power.

Maduro has launched an offensive in recent weeks in defense of the Monómeros agrochemical company and with this, he has increased the attacks on Colombia. The Barranquilla-based company is one of the assets that was handed over to opposition leader Juan Guaidó when he proclaimed himself president of Venezuela. Maduro intends to include the control of Monómeros in negotiations with the opposition in Mexico under the argument that if the company is under the control of his Administration, it would represent an important inflow of foreign currency for the country. “Monomers must return to their owners,” repeated the president, whose words have increased in tone as Colombia has shown signs of not agreeing to release the company.

The issue began to move in August when the Government of Venezuela called producers to a meeting in Caracas to ask them to join the campaign it had undertaken to bring Monómeros back under its control, with the promise of giving them access to fertilizers. “If everything is being put into place, Monómeros must return to its owners, to its parent company, Pequiven, so that all Monómeros products come to Venezuela to contribute to the comprehensive economic recovery of the country,” said the president in The last weeks. Maduro repeatedly accuses Guaidó of “having stolen” the Citgo and Monómeros refinery, which is the main supplier of fertilizers in Colombia and has an important place in the animal feed industry.

Monomers is an objective that the Venezuelan government will try to bring to the negotiating table in Mexico, for which it has already taken concrete steps. This Friday, the Chavista delegation accused in a statement the opposition gathered at the table “and their foreign sponsors” of “sabotaging, conditioning and evading the commitments of the memorandum of understanding.” For the Government, they are trying to ignore the case of Monómeros and also Citgo, when one of the signed agreements refers to “seeking concrete ways to rescue the patrimony, resources and assets of the Republic and restore the sovereign right of Venezuela to them”, point in the text.

Before this statement, Chavismo had already thrown a dart to threaten Guaidó. Earlier this week, prosecutor Tarek William Saab opened a new investigation for usurpation of functions, treason, conspiracy, qualified theft of assets and criminal association, regarding what happened with Monómeros. Justice acts after weeks of Maduro’s accusations to the opposition leader, whom he accuses of the theft of the company and mismanagement in alleged complicity of President Iván Duque.

Guaidó, for his part, announced that he will request a new external audit from Monómeros and assured that the possession of the company continues in the hands of Venezuela. “As we have done with all the assets, we will make efforts to recover them from the hand of a very important ally such as Colombia.” He pointed out that after the resignation of Carmen Elisa Fernández, the board will be restructured.

Duque’s recognition of Guaidó – as a consequence of his ignorance of Maduro’s mandate – was what allowed the Venezuelan opposition to take control of the company two years ago. In the midst of this war for Venezuelan assets between the Maduro government and Guaidó’s interim government, last month PDVSA sold its 49% stake in the Dominican Oil Refinery PDV (Refidomsa) to meet foreign debt commitments. In that transaction, which was only known from a statement released on Twitter by Maduro’s Oil Minister, Tareck El Aissami, the Dominican Republic was left as the sole owner of this complex. The Dominican government assured that US sanctions on the Venezuelan state company and the Maduro regime had complicated access to international credits and the company’s ties with suppliers.

The debate on Monomers strains the already difficult relationship between Maduro and Duque. Colombia assured a few weeks ago that the attack on the helicopter in which the president was traveling last June had been planned in Venezuela. The then Venezuelan Minister of Foreign Affairs, Jorge Arreaza, responded and accused Duque of using his country to hide the Colombian “tragedy”. Duque points to Venezuela as a refuge for FARC dissidents and ELN troops, and Maduro assures that Colombia seeks to hinder dialogues with the opposition in Mexico.

On the new pulse between the two countries, the Colombian president has just launched a couple of messages on Twitter. “The return of democracy to Venezuela is fundamental and any agreement that consolidates the dictatorship will be a continental tragedy that will only promote exodus and misery,” Duque wrote.

In Barranquilla, the manager of Monómeros, Guillermo Rodríguez Laprea, was more direct: “The supposed ‘delivery’ of Monómeros cannot be considered a serious prospect by the governments of the region, nor is it on the agenda of the discussions that are currently taking place. they support in Mexico with the groups that make up the opposition to the Venezuelan regime, ”the company’s management responded in a statement to Maduro’s claims in early September. In the same week, the Superintendency of Colombia announced that it would take control of the company, considering it necessary to exercise supervision over the company in administrative and legal processes “susceptible to improvement.”

Maduro interpreted the measure taken in Bogotá as an incitement to confrontation. “The Government of Colombia ordered the search and assault of our company in Colombia, Monómeros, our fertilizer company, to create a provocation that would generate a reaction on our part and break the dialogue, “he said indignantly after the news was known. Maduro insists on claiming the company for the benefit of Venezuelans, but the truth is that when Monómeros was under the control of Chavismo, the Venezuelan countryside had no inputs either. With the expropriation of Agroisleña in 2010 – of Spanish businessmen with decades in the country – the Government began to monopolize all agricultural materials. The producers had to pass through the state filter of the new Agropatria, which was joined by the military company Agrofanb and Agrosur. At the turn of a decade, agricultural production was reduced by less than half in fundamental items such as corn and sugar cane, with serious consequences on the food security of Venezuelans.

Before Monómeros passed into the hands of Juan Guaidó and the board to this that it designated for its operation, the company had been making up for the failures of its parent company Pequiven, which today, due to advanced deterioration, is much smaller than its subsidiary in Barranquilla, according to oil expert Rafael Quiroz. Despite the fact that the year before the change in management had reported losses and had reduced its capacity, the company supplies 40% of Colombian producers and 70% of coffee growers and exports to 50 countries.

In 2020 -in full pandemic-, Monómeros generated more than 15,000 jobs and its profits were 32,000 million Colombian pesos, equivalent to 8.3 million dollars, a growth of more than 200% compared to the previous year.

Spokespersons from the Colombian countryside see the dispute the company is in as a risk for the sector, but they doubt that even if the company were to remain in Maduro’s hands, the operation would cease to focus on Colombian territory. Jorge Bedoya, president of the Society of Farmers of Colombia, told the newspaper The Colombian Whoever is in the hands, Colombia will continue to be the main market in the face of the deep economic crisis in Venezuela.

The state-owned Pequiven, a subsidiary of Monómeros, has suffered the same collapse of the oil industry due to mismanagement, corruption and lack of maintenance. As it produced insufficient amounts of urea and nitrogen, Monómeros regularly helped with 5,000 tons of NPK fertilizer per month until Venezuela and Colombia closed their borders in 2015, according to sources in the agricultural sector. Since then, the shortage of agrochemicals has become much more serious. In December 2018, Maduro appointed Ronald Ramírez as president of Monómeros, a man with a career in the petrochemical industry but linked to companies of Alex Saab, the Colombian businessman who, while waiting in Cape Verde for extradition to the United States, was proposed to join the dialogue table. On January 30, 2019, with Guaidó already sworn in as interim president, Ramírez was inadmissible in Colombia when he was about to take office due to his links with the Maduro regime, which Iván Duque is unaware of. The Venezuelan institutional labyrinth was just beginning.

Suffocated by the economic and food crisis, the Chavista government finally stretched the rope in 2020 to the producers and gave them the permits to directly import the inputs that for a decade were forbidden to the private ones. The same thing that Maduro has had to do with other economic sectors in which he has lifted controls. Between last year and this year, 110,000 tons of fertilizers have been imported from Russia, Turkey and the United States. “It is a private effort by our producer associations, because Pequiven and Agropatria are bankrupt,” says Celso Fantinel, president of the Fedeagro farmers’ association.

Monómeros has not yet reached the dialogue table with the opposition in Mexico, but the government delegate, Deputy Jorge Rodríguez, has already given signs of how the tone of the debate will be, which will be resumed in person in a week. “Monómeros belongs to the Venezuelan State and any action taken by the Duque government is a flagrant theft,” said Rodríguez, who is also president of the Venezuelan Assembly.