A woman becomes the first sentenced for the assault on Capitolo 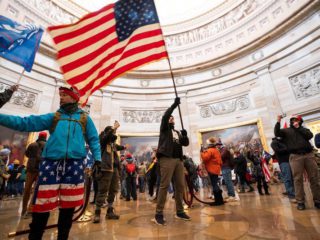 Washington, Jun 23 (EFE) .- A woman from the state of Indiana (USA) on Wednesday became the first defendant to receive a sentence for the assault on the US Capitol on January 6.

Anna Morgan-Lloyd, who previously described that date as “the most exciting day” of her life, was repentant this Wednesday during the hearing before the judge of the US District Court, Royce Lamberth, according to various media. local communication networks.

The supporter of former US President Donald Trump, (2017-2021) who spent ten minutes inside the Capitol during the insurrection, was convicted of a misdemeanor – trespassing into a public building – and was on probation without jail time.

In any case, she is the first accused of the assault to know her punishment in the context of the investigation of the disturbances.

Morgan-Lloyd, 49, will also have to pay a $ 500 fine after pleading guilty to this crime for entering the Capitol with the mob that carried out that assault on January 6.

During the reading of the sentence, Judge Lamberth criticized the Republican legislators for downplaying the violence the events of January 6.

Lamberth said he was “especially concerned” by accounts by some members of Congress that January 6 was “just a day of tourists walking the Capitol.”

The magistrate was referring to statements in May by a Republican member of the Lower House, Andrew Clyde, who compared the assault on the Capitol to “a normal tourist visit.”

“I don’t know what planet they were on … This was not a peaceful demonstration. It was not an accident that turned violent; it was intended to stop the very functioning of our government,” Magistrate Lamberth insisted.