According to a study, to meet the limit on global warming in 2050, 60% of the world’s oil should not be exploited: how it would impact Argentina 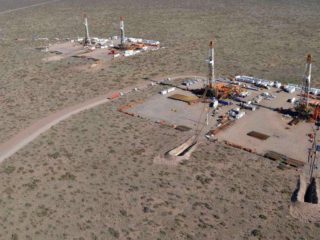 Almost the 60% of methane gas emitted by fossil fuels and the 90% of coal reserves must remain on the floor unexploited before 2050 to have “at least a 50% chance” of limiting global warming to 1.5 degrees, according to a study by a British team of researchers and published this week in the prestigious scientific journal Nature.

Scientists from the University College London (UCL) warned that many fossil fuel extraction projects that are already programmed will not lead to the fulfillment of the climate objectives set internationally in el Paris Agreement in 2015. In this sense, they estimate that oil and gas production must be cut by 3% annually by 2050 In order to achieve these goals, policies to restrict production and demand reduction to encourage producers to rethink production.

The Fossil fuels account for 81% of world energy consumption. The study recalls that in 2015 another Nature publication estimated that a third of oil reserves, the half of gas and 80% of coal they should remain unused by 2050 in order to have a good chance of limiting global warming to 2 degrees.

The expert Dan Welsby and a group of colleagues started from that assumption and assessed the proportion of fossil fuels that must remain unused in order to have the possibility of limiting global warming to 1.5 degrees. And to achieve this, an additional 25% of reserves must remain in the land compared to what was estimated in 2015: according to the new study, the 58% of the oil reserves it must remain unexpired on a global scale, against the 33% estimated 6 years ago.

In a virtual meeting with the media, Welsby assured that reaching the programmed objectives is a task “Technically possible” in any region, but it depends a lot “Of the political situation and political will” of each country.

The voice of an expert

The Argentina signed on April 22, 2015, at the United Nations, the Paris Agreement on Climate Change, whose global goal is to sustain the increase in global temperature below 2 °, at pre-industrial levels, trying to make efforts to limit it to 1.5 °.

To understand how the scenario affects Argentina raised by the study published by the journal Nature, TN.com.ar spoke with Luciano Caratori, consultant and researcher at the Center for Studies in Global Climate Change, Fundación Torcuato Di Tella. AND these were their responses:

How does this scenario affect Argentina?

At least two dimensions emerge here: how it affects you as for oil exporter and to a lesser extent gas, and how it affects it in terms of consumer of oil and gas derivatives.

As an exporter, if demand is effectively reduced in a manner compatible with that scenario, this first restricts the volumes that you can place and secondly at what prices you can place them. Broadly speaking, we can say that if demand is reduced as a result of global climate action, fuel substitution and efficiency, suddenly there is surplus production that, unless it can modulate them, reducing it, cause prices to drop sharply. If the price that producers receive at the wellhead for these exports is below the “break even” prices (covering expenses), production becomes unviable.

If demand is reduced as a result of global climate action, there will suddenly be production surpluses that will cause prices to drop sharply. If the price that producers receive at the wellhead is below the “break even” prices, production becomes unviable.

Now the second dimension is how it works in your home market, which is a limited market. If some mechanisms that are being negotiated such as carbon adjustment at the border prosper, which in a certain way (in addition to protecting the industries of the countries that today have significant prices for CO2) tax the implicit content of emissions of the products that let us export -that is, how many emissions are generated throughout the life cycle of the products-, the incentive for exporting industries is to reduce their emissions, and a relevant part of their emissions is linked to their consumption of fossil fuels.

So what can be seen, in certain industries, is a growing concern to be more efficient in the use of energy and to substitute fossil fuels for other sources that do not emit. This also hits the potential demand of the domestic market.

Is it possible to achieve an extraction reduction of such magnitude in Argentina?

Argentina has an enormous availability of resources that will allow you to compete in this new world, from the great availability of solar and wind energy, going through the biofuels in which it has idle installed capacity. In terms of both your domestic market and your exports, if you make the right decisions, you can be a great exporter that even contributes to mitigating in other countries (let’s think of biofuels and hydrogen from renewable sources or even gas natural if it captures those emissions).

But we have to be very careful with the decisions we make, both policy and infrastructure so as not to condition those capacities to compete. Because many infrastructure construction policies or decisions can generate a “lock effect”, which conditions future decisions.

For example, an industrial promotion law for hydrocarbons, such as the one proposed, until the year 2040, does not seem to be compatible with a world in which more and more countries commit to generating zero net emissions in 2050. What are we going to do? to do in 2041? Putting a subsidy to support the conditions of 2040 because “the world no longer buys or buys at low prices”?

Or if the State builds infrastructure that is not compatible with that world that asks for zero net emissions, will it be able to respond to those requirements?

How to think about a change in a country that lives in economic crisis?

I think what we have to think about is how this scenario can aggravate or mitigate these crises, which are constant. In Argentina, restrictions related to the need for foreign exchange and to substitute imports, the need to create employment and maintain energy prices that are affordable but that in turn remunerate the economic cost of producing, generating, transporting and distribute it, fiscal restrictions, and others.

It is absurd to think that Argentina can isolate itself from the world and global trends, because they are going to hit you squarely in your competitiveness. We have to design a strategy that allows us to take advantage of this new wave, and above all, I insist, not condition our ability to take advantage of it with spasmodic and short-term decisions.

It is absurd to think that Argentina can isolate itself from the world and from global trends. The longer we take to give the concrete signals of where we are going, the more complicated and expensive it will be, because not only assets can be stranded, but also people, and that would be much more serious.

We also have to be clear that it is not possible to snap your fingers and that everything changes instantly, because Argentina has a vast infrastructure, value chains, provincial and local income, and above all, people, who live off the hydrocarbon chain. We have to address this issue because if transitions are not fair, they are probably unfeasible due to their social impact and the political turbulence they can generate.

But the longer we take to give concrete signs of where we are going, the more complicated and expensive it will be, because not only assets can be stranded, but also people, and that would be much more serious. That is why the most important thing is to look first at the incremental. Does this policy, this program, this new infrastructure, facilitate or hinder, make that transition more expensive or cheaper?