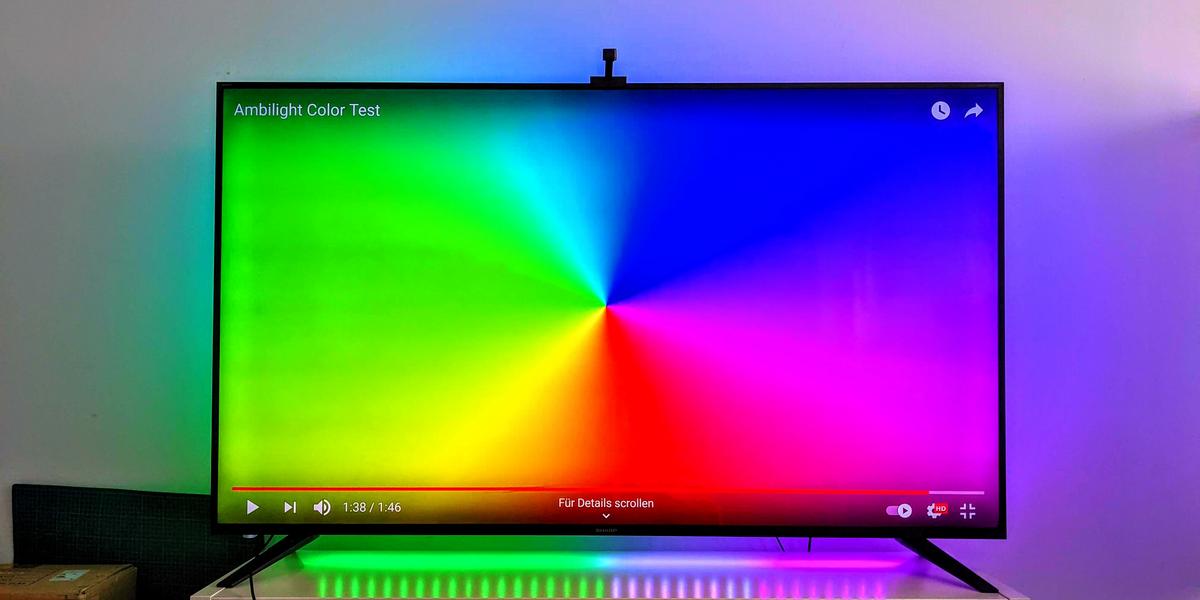 Advice: Retrofit Ambilight on every TV from 75 euros

If you want native Ambilight, you should look for appropriate support when buying a new TV. Currently only Philips televisions can do this. The additional investment is kept within limits compared to televisions without Ambilight. More on this in our 4K TV buying guide: UHD TVs are available from less than 250 euros.

But there are also ways to retrofit this effective feature. One approach takes the HDMI signal and transmits the appropriate image information to the LED strip that sticks to the edge of the back of the TV. This is what the Philips Hue Sync Box uses. Another provider is Dreamscreen 4K, which we have left out in this guide because the device is no longer sold in Germany. Raspberry solutions are also available for technically savvy users. Govee Immersion takes an alternative route, it picks up the color information via a camera.

The Govee Immersion TV Set costs 75 euros, but is often cheaper during promotions. In addition to the RGB LED strip and the control unit, the set also includes a camera that reads the color information from the television. The LED strip, the LED elements of which can be controlled individually, is suitable for televisions from 55 to 65 inches, according to Govee. We tried it out on a 75-inch device and had no problems with it.

The installation of the hardware is easier than we feared in advance. Basically, it didn’t take us more than ten minutes to do this. To do this, first peel off the protective layer on the self-adhesive LED strip and position it on the edges on the back of the TV. The LED strip consists of four elements connected to one another by cables. The instructions clearly show which LED strip goes where.

Then the camera needs to be attached, which also has a self-adhesive base for this purpose. According to the instructions, stick the camera in the middle of the frame above the TV. However, we recommend sticking the camera underneath the TV. This makes it visually less disruptive. The positioning can be adjusted in the app. In the last step, you glue a small control unit in the middle of the back of the TV and connect all the elements with each other via cables.

Further setup takes place via the Govee app. To do this, buyers first glue the six foam rectangles supplied with them to specific points on the TV screen in the instructions. The app then automatically detects where the areas of the television are located that are relevant for the appropriate color information. The calibration can also be adjusted manually afterwards. To do this, the app shows the camera image in which the user draws a rectangle around the television.

In the app, it is also possible to let the LED strip react to music, to vary between video and game in video mode, to program color schemes yourself and to choose ready-made scenes such as candlelight, sunset or rainbow colors. The possibilities are surprisingly diverse. In addition, the app is clear and self-explanatory. We have seen that much worse from other Chinese companies.

The Govee Immersion TV Set does not turn on with the TV. However, it is permanently in the WLAN and reacts to the voice assistants from Amazon and Google. In addition to simply switching it on and off, the set also listens to changing scenes, adjusting the brightness and much more.

The Govee Immersion TV Set creates a subtle ambilight effect in brightly lit rooms. Because the LED strips are not particularly bright. As soon as the room is darkened, however, the colors shine intensely from behind the television. The respective color information is displayed with a slight delay. Also, the colors don’t always seem to match the content of the screen perfectly. However, this is only noticeable if you have the appropriate Test videos runs. Normally watching videos and movies is usually where you focus on the content. This is moderately but coherently supported by the ambilight effect of the Govee Immersion TV set.

Anyone who has a couple of compatible Philips Hue lamps (test report), the current Hue Bridge and a computer can already retrofit Ambilight. To do this, you install the sync software on the computer, determine which Hue lamp is where in the room in the smartphone app and connect the television to the computer via HDMI cable or Chromecast. Now the software picks up the contents of the computer’s screen and transmits the light information to the Hue lamps. This works well, but is usually cumbersome. More on this in our Philips Hue Sync test guide: The retrofit Ambilight.

But it can also be done much better, easier – and more expensive. For this you need the Philips Hue Sync Box and ideally the Philips Hue Gradient Lightstrip. Theoretically, the Sync Box also works with classic Hue light strips and other Philips Hue lamps. However, the LEDs on the Gradient Lightstrip can be controlled individually, which ensures a significantly better Ambilight experience. Completely new, Philips Hue will also have additional gradient solutions in its portfolio towards the end of 2021. This includes the Gradient Light Tube, a light tube that is also attached behind the TV and creates the Ambilight effect.

Installation is very easy, as is typical of Hue. The sync app shows you step by step what you need to do. Unfortunately, the sync app needs to be installed in addition to the Hue app. Once set up, you can choose between video, music and game modes. In music mode, the light reacts to the sound of the connected player. There is no microphone like the Govee Immersion TV Set to interpret the music played by other sources in the room.

In addition, the user can determine the intensity via the sync app. The moderate option proved its worth in the test. At higher settings, the lighting effects quickly become hectic and distract rather than support the picture. The variation in brightness relates to all the light sources linked to the system. Unfortunately, it is not possible to adjust the luminosity of these individually.

If you want it a bit nerdy, you should take a look at the craft solutions with a Raspberry Pi. To do this, it is first necessary to get the image signal on the Ambilight computer. This can be done either via a USB TV stick, via IPTV or a DVB receiver such as the Dreambox. It becomes difficult when external HDMI players are used. In principle, the HDMI signal can be tapped via an upstream splitter, but the HDCP copy protection nullifies this, at least with digital transmission. So, thanks to a grappler, the analog image signal is converted to the Ambilight computer via the splitter. The quality of the SD analog signal is sufficient for the required image information.

For the replica, the hobbyist needs an RGB light chain, the LEDs of which can be individually controlled via an IC. WS2812B or its successor SK6812 are ideal for this. In addition, you need a suitable power supply unit for the LEDs and a controller such as a Raspberry. The controller must match the choice of control IC.

We recommend the heise + article for instructions with video and software links Light chi-chi.

Anyone who is already thinking of buying a new television can do without all of the retrofit solutions and use a Philips device that supports Ambilight natively. The price differences to televisions without Ambilight are not particularly high. Here in the price comparison we show the cheapest Philips TVs with Ambilight.

Ambilight just looks great! However, if you do not have a corresponding Philips television, you have to resort to retrofitting solutions. The market here is quite clear. Basically there are only two ready-made solutions that get by without a lot of handicraft work. Buyers get the best result with the Philips Hue Sync Box in conjunction with the Hue Gradient Lightstrip. This solution is simple, reliable, and extremely impressive. However, at around 400 euros, it is also expensive.

The Govee Immersion TV Set is much cheaper. For 75 euros or less, it can’t compete with Hue in terms of the Ambilight effect. Also, some will interfere with the camera. Nevertheless, the result is particularly pleasing in darkened rooms. In addition, the app offers many functions and the LED strip on the back also listens to Alexa and Google.