After a new record of cases in Brazil, the fear of a third wave grows and the alerts are lit in the region 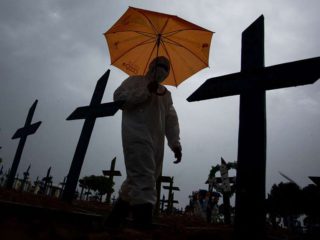 In the midst of the Copa América football dispute, Brazil registered 115,228 coronavirus infections in the last 24 hours this Wednesday, a new daily record, according to figures released by the Ministry of Health.

These numbers seem to confirm the worst forecasts of sanitary experts who predicted the arrival of a third wave of the pandemic to the country, which sets off all the alarms in the region and especially in the neighboring countries like Argentina.

// Coronavirus in Argentina: 706 deaths and 27319 infections were reported in the last 24 hours

Brazil is one of the three countries in the world most affected by the pandemic in absolute numbers, along with the United States and India.

The fear of a third wave

Brazilian specialists have been warning, for several weeks, about the possibility of the arrival of a third wave from the pandemic to Brazil. A recent newsletter from the Oswaldo Cruz Foundation (Fiocruz), a reference institution in national public health, warned about the real risk of a third wave with a ascending epidemiological curve in eight of the 27 Brazilian states.

// In the absence of second doses, Alberto Fernández attacked the opposition: now they demand the poison

The report had warned that by mid-June there could be between 2,000-2,300 deaths a day. This Wednesday 2,392 deaths were reported, which confirms the forecasts of the experts. In May, the average number of fatalities was 1,900.

Fear is increased by the spread of the variant Delta, much more contagious than the other strains and originated in India. This new variant, which in turn has a mutation named Delta Plus, whose dangerousness is still under study, is affecting countries such as Russia, the United Kingdom and even Israel, where some restrictions were reimposed on Wednesday.

The new record was recorded in the midst of the soccer Copa América, whose organization was contested by the Brazilian opposition after Colombia and Argentina gave up being venues due to their difficult epidemiological situation due to the pandemic.

// Delta variant: the different strategies of the City and Province of Buenos Aires for the second doses

Furthermore, the vaccination campaign has not yet succeeded in quelling the spread of the virus. Even the local press denounced that in the city of São Paulo missing doses were reported this Wednesday in nine health posts. Another 25 immunization units had to close two hours than expected, according to the site. OGlobo.