After a week-long break: the Hubble space telescope is sending photos again 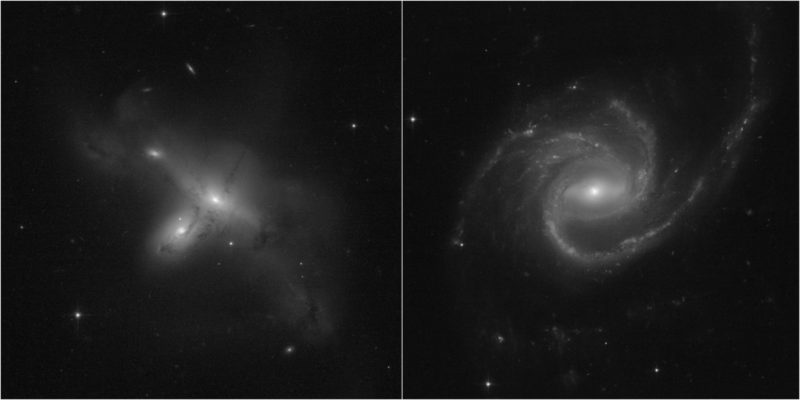 The Huble space telescope, which has not yet reached the end of its long career, is again taking astronomical images and NASA is happy about the successful repair from a distance. Previously, the world-famous instrument was not ready for use for more than a month after it switched itself off on July 13th. Only after long and complicated preparatory work did the space telescope report back last Thursday and since Saturday it has been doing research again. The first images to be transmitted to Earth now include images of two unusual galaxies.

After only a decrepit memory module had been blamed for the failure, suspicion turned to a module responsible for sending and formatting data. Switching to the backup technology available on board, but never deployed in space before, was therefore much more difficult than initially thought. A total of 15 hours of command sequences had to be transmitted to the instrument, which was circling at an altitude of 500 kilometers, the US space agency now explains. They had prepared more than 50 people and retired specialists were also called in. After all, Hubble has been in use for more than 31 years and the technology used is significantly older.

“Now is the time to celebrate the success of a team that is truly committed to its mission,” says NASA boss Bill Nelson. He is so happy that Hubble is turning his eyes back to the universe. Kenneth Sembach from the Space Telescope Science Institute (STScI), where the scientific work is coordinated, is also impressed by the success and says: “I firmly assume that Hubble will continue to impress us with scientific discoveries.” The instrument, for which NASA and ESA are responsible, has been in operation since 1990 and has fundamentally changed and shaped our image of the universe with countless recordings not only of stars and galaxies. Even before the most recent problems, however, the old age has been evident again and again. With the James Webb Space Telescope, a successor is now in the starting blocks.