After the letter to Russia for the lack of component 2, Alberto Fernández said that “it gives him peace of mind” that 50% of the population has the first dose 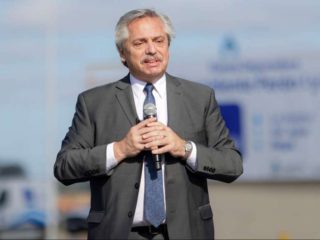 He highlighted the pace of the inoculation campaign and assured that immunization with a serum generates “a very high level of immunity.”

The president spoke after the dissemination of Nicolini’s harsh note about the delays in the delivery of Sputnik V (Photo: NA).

“50% of the Argentine population is vaccinated at least with a dose, which gives us a lot of peace of mind ”, stated the president Alberto Fernandez, who said that this generates “a level of immunity very high ”against the coronavirus.

The president spoke after the diffusion of the hard document that the presidential adviser Cecilia Nicolini sent him to Russia for the delays in the shipments of the second component of the Sputnik V vaccine. In the document the official warned that Argentina could reach unsubscribe the contract, but later the Government denied that the agreement is going to fall.

“We live the worst of nightmares, all of us. There is no worse nightmare than the pandemic. All citizens suffer it, but those of us who govern, those of us who count infections and deaths every day and carry a dagger to our hearts with these data, we know more”, Said the President this Thursday at an event in Florencio Varela.

Next, the president defended the health policy of the national government and criticized the opposition: “We went to get the vaccines. We began to vaccinate among the first countries in the world. They said vaccines were poison, that we were bringing any crap to vaccinate Argentines. They had to wait for an international publication, they needed an English magazine (The Lancet) to say it, and there the vaccine became wonderful, “he said.

The same day that it became known that the Government contacted Russia and warned it that the country “urgently” needs the second component of the Sputnik V vaccine for millions of Argentines who have already received their first dose, Alberto Fernández stated: “Today 50% of the Argentine population is vaccinated, at least with one dose. That dose gives us a lot of peace of mind, because it gives a very high level of immunity. We know that the risk of being infected exists, so we must continue to take care of ourselves, but we also know that the suffering of the disease will be much less”.

The President also assured that “the exit door (of the pandemic) is just here.” “This accelerated vaccination process that we are experiencing is like turning the wall over and finding the light on the other side. The exit door is just here, that most of us are vaccinated, there we will return to our lives, we will embrace each other and enjoy the affection of our families and friends. We will be happy again”, He assured.

Criticism of the opposition

At the beginning of the electoral campaign, Alberto Fernández continued his criticism of Together for Change (JxC) and the Government of Mauricio Macri. I affirm that “when they arrived they made us believe that the state was over, they closed schools and put Argentina into debt and today they tell their government how to govern ”. In that sense, he highlighted the importance of “the State being present” during the pandemic, in which, he said, “no Argentine was left without care and without a bed and assistance.”

The president announced the expansion of the “Manuel Belgrano” scholarships, aimed at students from national and provincial universities with strategic careers.