Home
News
After the “worst maritime disaster” in Sri Lanka’s history, 1,680 tons of plastic granules put thousands of families in the country in check

After the “worst maritime disaster” in Sri Lanka’s history, 1,680 tons of plastic granules put thousands of families in the country in check 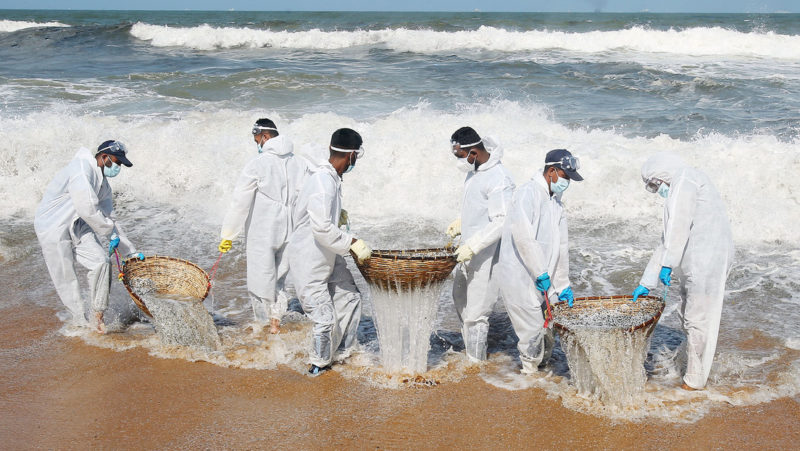 Since the container ship X-Press Pearl caught fire and sank in the Indian Ocean between May 20 and June 2, the Sri Lankan authorities have not stopped cleaning their beaches of small plastic balls, called ‘tears of siren’.

These pre-production plastic granules, as they are formally called, have been extracted from the bodies of some marine animals found dead on the coasts of the island country since then, according to informs The Guardian. While there is no evidence that these lentil-sized particles directly caused the deaths of 470 turtles, 46 dolphins and 8 stranded whales, there are witnesses that they were found on several corpses.

Another consequence is that nearly 20,000 Sri Lankan fishing families they had to stop fishing, due to the presence of the material in their captures.

At the time of the sinking, Sri Lanka were concerned about the 350 tonnes of heavy gasoline that would leak from the ship, recently commissioned at the time, causing an environmental disaster on coral reefs and the fishing industry. The accident was recognized by the UN as the “worst maritime disaster” From Sri Lanka, however, the most serious impact was caused by the contents of the many containers on deck.

Nitric acid, caustic soda and methanol stand out among the chemical products that the ship was carrying and the “most significant” environmental damage, according to the UN, came from the sinking of 87 containers filled with the aforementioned small balls. It is the largest plastic spill in the world, according to the same report.

Approximately 1,680 tons of ‘mermaid tears’ were dumped into the ocean. Billions of these plastic granules are expected to make landfall on many more ends of the Indian Ocean, from Indonesia and Malaysia to Somalia.

“The granules themselves are a mixture of chemical substances, they are fossil fuels,” environmentalist Tom Gammage, from the Environmental Research Agency (EIA), explained to the British media. “toxic sponges”. “Many toxic chemicals,” he said, “which in Sri Lanka’s case are already in the water, are hydrophobic. [repelen el agua], so they accumulate on the surface of microplastics. “

According to the expert, these pollutants “can be a million times more concentrated on the surface of the granules than in the water.” And there are also laboratory studies that suggest that “when a fish eats a pellet, some of these contaminants are released.”

The ingestion is due to the fact that birds, fish and other marine animals often mistake the plastic granules for food. Like crude oil, these ‘mermaid tears’ are very persistent pollutants and will continue to circulate in ocean currents and end up on shores for decades. However, most of them nanoparticles are detached, whose dangers are even more serious, as they are the second largest source, by weight, of micro-pollution in the ocean, after tire dust.