Air quality alert issued in New York due to smoke from wildfires on the west coast of the United States. 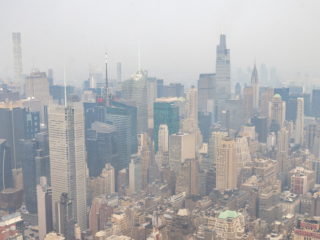 The many wildfires unleashed on the west coast of the United States have left New York City, 3,218 kilometers away, in a haze of smoke, forcing city authorities to emit air quality alerts.

As more than 78 large wildfires continue to spread after having Burned 545,004 hectares, spreading through 13 states, smoke swirls across the North American country, creating hazy skies along the East Coast and from Toronto (Canada) to Washington, DC (USA).

7/20/2021The video here is a model depiction of how the smoke has been traveling amongst atmospheric winds today. #phwx#okwx#txwxpic.twitter.com/n5JImEsbKS

In New York, where a gray haze has covered the Manhattan skyline, the Air Quality Index (AQI) for fine particulate matter I arrive this Tuesday at 154, a level considered harmful even for healthy people and higher than the maximums established by the World Health Organization.

On the alert issued, the US National Weather Service urged sensitive groups – particularly children and people with asthma or heart and lung disease – to stay in closed areas to minimize the effects of air pollution.

Until Tuesday, about three million people they remained under red flag warnings in eight northwestern states and the northern plains. This includes first and foremost the areas near the ‘Bootleg’ fire in Oregon, the largest this year in the entire country.