Airlander 10: the hybrid airship over 90 meters long, which promises to become an environmentally friendly alternative to the airplane 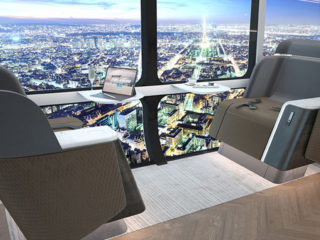 The British company Hybrid Air Vehicles recently unveiled the future design of the Airlander 10 airship-airplane hybrid, a project that has been in development for more than 10 years and underwent considerable changes.

The manufacturer promises that the aircraft, the longest in the world, will become a comfortable means of transport, ideal for intercity travel, and will be incomparably more environmentally friendly than the plane.

Development of the airship and its test flights

Development of the device began in June 2010. Initially, the aircraft was designed by the British company Hybrid Air Vehicles (HAV) and the American aircraft manufacturer Northrop Corporation for the US Army, but these plans were hampered by budget cuts in the US In order not to bury a promising project, HAV bought the rights and continued development.

In terms of technical characteristics, the 92-meter-long aircraft – almost twice the length of an average commercial airliner – was expected to carry 48 passengers and be capable of traveling at a speed of more than 140 kilometers per hour. Too should be able to stay in the air for up to two weeks and access isolated regions, allowing it to be used to transport supplies, for example to areas where disasters have occurred. Also, it could be used for intelligence or entertainment purposes.

In August 2016, the airship, which cost £ 32 million (over $ 41.7 million), made its first test flight from the Cardington runway, north of London. Days later, it was announced that, when conducting its second flight test, the device, jokingly known as ‘flying butt’ because of its unique shape, it fell headfirst into Bedfordshire while trying to land.

The incident did not leave victims, but it was not the only one who suffered the promising aerostat. In November 2017, the aircraft fell on a field and its cabin was destroyed. This accident occurred after the Airlander 10 was dislodged from its mooring, after which two people were injured.

In January 2019, Hybrid Air Vehicles announced that it will complete development of the prototype and will be replaced by a commercial model. On that occasion, the company indicated that the prototype fully fulfilled its purpose, demonstrating that the creation of the first large hybrid aircraft was possible. They stated that they obtained all the necessary data to move to the production standard.

About a year after that announcement, the company indicated that they wanted the device to be more environmentally friendly, predicting that it would produce “75% less emissions than a comparable aircraft.”

After a long hiatus, Hybrid Air Vehicles revealed at the end of May this year the concept of the interior of the passenger cabin of the commercial model of the airship, in which – they pointed out – they will be able to travel up to 100 people. According to the project, the space will have soft armchairs positioned in such a way that each passenger has access to the corridor. The most striking thing about the design is its large floor-to-ceiling windows, which will offer spectacular views during flights.

Regarding the date of appearance of the device, the executive director of the company, Tom Grundy, Indian to CNN that they hope to have 3 airships ready by 2023, while, according to their estimates, the first passengers will be able to board in 2025.

To take off, Airlander 10 will use a large helium balloon, while it will remain in the air during the flight thanks to the operation of 4 propellers. In the first devices, two of these propellers will work with kerosene motors and two with electric motors. However, the company expects that by 2030 aircraft will start using only the power of electric motors. In this context, it should be noted that Hybrid Air Vehicles ad in June the airship will receive 500 kilowatt engines that will be produced by Collins Aerospace.

The main advantage of the airship is that it can take off and land on practically any flat surface. With a speed maximum of 130 km/h, the aircraft will produce less than 10% of the carbon dioxide emissions generated by a conventional airplane. According to the manufacturer, the aircraft will be ideal for “intercity mobility”.

“For decades, flying from A to B meant sitting in a metal tube with small windows, a necessity but not always a pleasure. At Airlander, the whole experience is pleasant, even pleasurable. And its hydro-electric setups and completely electric make it suitable for decarbonized future“said George Land, director of business development for Hybrid Air Vehicles.