Alberto Fernández after the defeat in the elections STEP: “It is time to correct the things we did wrong” 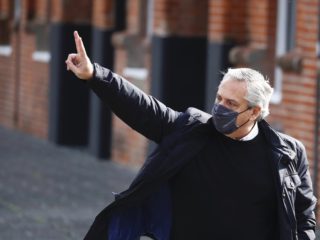 “It is time to correct the things we did wrong,” Argentine President Alberto Fernández said on Tuesday, analyzing the tough defeat of the Frente de Todos (FdT) in the legislative primary elections (PASO) on Sunday.

During the start-up of 25 public works in 15 provinces, in an act led by the party of Almirante Brown, province of Buenos Aires, the president ratified the direction of his government but recognized the demand of the electorate, hit by the health and economic crisis.

“Now, that this time of pandemic is passing thanks to a vaccination process that has been very successful, it is time to continue doing what we are doing well, to do what had to be postponed due to the pandemic and to correct the things that we did wrong, “said the president.

In the elections that defined the candidates for the general elections on November 14, the Alliance Together for Change (macrismo-center-right) prevailed in almost the entire country, even in districts dominated by Peronism.

In the Buenos Aires province, where 37% of the Argentines called to vote live, the opposition coalition has exceeded 38% of the votes, while the ruling Frente de Todos reached 33%.

If these results are repeated in the legislative elections, they allow the macrismo to position itself on the right foot in the face of the presidential elections of 2023, and dream of a return to the Casa Rosada.