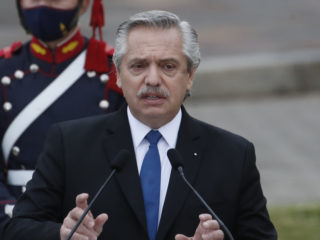 The president of Argentina, Alberto Fernández, congratulated Pedro Castillo, from Peru Libre, for his eventual victory in the ballot for the presidential elections in Peru, held last Sunday, June 6.

Through his Twitter account, Fernández reported that he contacted Castillo and expressed his desire to join “efforts in favor of Latin America.”

Today I contacted @PedroCastillo, president-elect of Peru. I expressed my wish that we join forces in favor of Latin America. We are deeply twinned nations. I celebrate that the dear Peruvian people face the future in democracy and with institutional solidity. pic.twitter.com/vKaKpdBdik

He also celebrated that the Peruvian people “face the future in democracy and with institutional solidity.”

So far, Peru has not released the final results of the elections, in which Castillo faced the right-wing Keiko Fujimori, from Fuerza Popular.