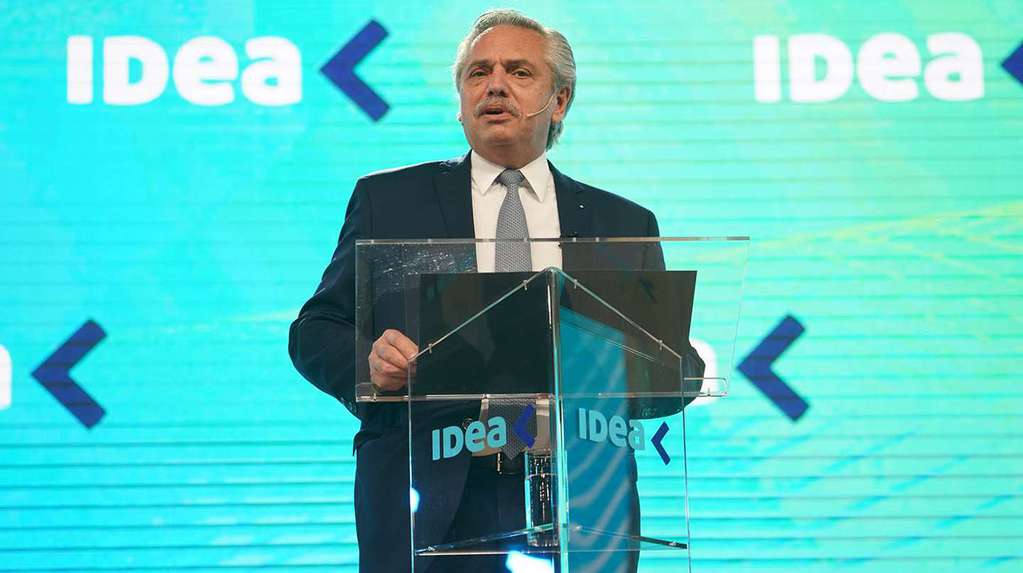 President Alberto Fernandez confirmed that the Government will issue a decree that regulates the conversion of social plans into jobs and promised employers that both the prohibition of dismissals such as double severance pay “They will not be extended in time.”

“We are establishing through a framework decree a system that makes it possible for those who are beneficiaries of plans today to be employed in private activity without losing that right. We need to boost registered employment”He said during the closing of the 57th IDEA colloquium.

According to Fernández, “three economic activities have already made progress in meeting that objective.” “First it was in rural areas where we encouraged those who have plans to become rural workers so important when it comes to harvesting. Then we continue on the same path in construction. And yesterday we took another step in the same direction with the gastronomic and hotel activity ”, he added.

When talking about plans and subsidies, Fernández assured that “State assistance cannot be the remedy for lack of work, but only a palliative”. “The first great problem that Argentina must face decisively is to end unemployment,” he continued. “Change plans for employment: this must be our first objective”He said in front of the main businessmen and women in the country.

The President also warned that the government of Mauricio Macri “multiplied the social plans in Argentina.” According to what he said when former President Cristina Kirchner ended her term in 2015, there were “less than 200 thousand social plans” in force, unlike the “almost 800 thousand plans that were distributed in Argentina” when Cambiemos’ term ended in 2019.

“The indiscriminate opening of imports, the sustained fall in consumption and the closure of 23,000 SMEs, coupled with a worrying increase in unemployment and poverty,” he said.

To the entrepreneurs, he warned that “we should not see work as a cost, but rather as an investment”. In addition, he took the example of several Nordic countries to reject the idea that ending severance pay would create more work.

“An economy that grows, produces and exports needs a well-paid workforce protected in their rights ”, he asserted. “With this labor system, 4 million jobs were created in Argentina between 2002 and 2015,” said the President.

However, he promised that both double compensation such as the prohibition of dismissals “They will not be extended in time.”

“The exceptional measures that we have taken (prohibition of dismissals and double compensation) must be understood in this way. They have been arranged in an exceptional moment and they will not be sustained over time ”, he declared.

What Alberto Fernández said about the price agreement

While the Government is pushing to freeze the prices of more than 1,200 products in the basic basket, the President referred to the issue: “In September and so far in October the price of the items in the family basket has increased in an incomprehensible way“, said.

And he warned that “entrepreneurs must make their contribution”: “We must find a agreement for that to stop but everyone should know that we will be inflexible in this matter. A society where some win and millions lose does not resemble a society but rather a swindle. I am confident that I can find that balance at a common table where this issue is discussed ”.

What Alberto Fernández said about the debt

The president dedicated the end of his speech to the debt, “a problem that we inherit” and that “must be definitively resolved” so that the country can grow and “resume its course.”

“In part we have resolved the issue by agreeing with private creditors”, which allowed “to save time” and achieve “a debt reduction of more than 37,000 million dollars.”

Referring to the debt taken on with the International Monetary Fund, he stressed that “it is a unique case in the history of the organization.” “The loan given to Argentina in 2018 by $ 57.1 billion it represented the largest loan granted by the agency to a member country. That sum was equivalent to 11% of Argentina’s GDP and it was given in a forex drain frame that contradicted the same statutes of the international credit organization ”, he declared.

“As credit contracted under the ‘stand by’ modality, in the two years that follow (2022 and 2023) Argentina is obliged to pay each year more than 19,000 million dollars “, he specified.

The president affirmed that the government’s decision to “find a quick agreement with the IMF is absolute” and thus criticized the opposition: “Those who today propose to take more credits to pay this credit, are actually the same ones that generated this debt” .

“Argentina needs entrepreneurs who are the first workers. Without lobbying and with creativity. Without speculation and with production. Without greed and with solidarity. Enrique Shaw used to say that a company is like a ship: the carelessness of one can bring everyone down. Let’s think of Argentina that way. We can make a better country ”, concluded his speech.