Alberto Fernández’s failed quote: “The Mexicans came from the Indians, the Brazilians from the jungle, but the Argentines from the ships” 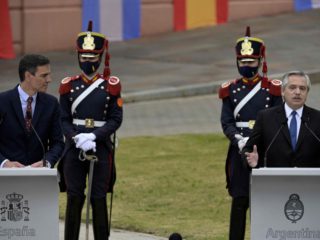 Argentine President Alberto Fernández made an unfortunate mistake this Wednesday by misrepresenting an alleged phrase by Mexican writer Octavio Paz. “Octavio Paz once wrote that the Mexicans came from the Indians, the Brazilians came from the jungle, but we Argentines came from the ships. They were ships that came from Europe, ”Fernández said at a press conference with the President of the Government of Spain, Pedro Sánchez.

What was intended to be a compliment to Europe for the importance of its immigration for Argentina between the 19th and 20th centuries became a scandal in the media and social networks, where the president was accused of being racist under the hashtag # VergüenzaNacional.

In the appearance held at the Bicentennial Museum in Buenos Aires, Fernández attributed words to the Mexican Nobel Prize for Literature that corresponded to an Argentine rock singer. In fact Paz wrote: “The Mexicans descend from the Aztecs, the Peruvians from the Incas and the Argentines from the ships.” The phrase quoted by the Argentine president corresponds to a stanza of the song “We arrived from the boats”, by the musician Lito Nebbia.

Between 1881 and 1914, the moment of the migratory explosion, Argentina received more than four million foreigners, including two million Italians and 1.4 million Spaniards. However, before the arrival of the first Europeans, in the 16th century, the country was already inhabited and even today, according to data from the last census, the country has almost a million indigenous people.

Hours after the appearance, the Argentine president apologized on Twitter and highlighted the pride that Argentina’s diversity represents. “I did not want to offend anyone, in any case, who has felt offended or invisible, since now my apologies,” he tweeted.

His statements show the persistence among the political class of Buenos Aires of the myth of Argentina as a country of European origin, without indigenous roots. In 2018, Fernández’s predecessor, Mauricio Macri, made another controversial allusion during the World Economic Forum in Davos, Switzerland. “I believe that the association between Mercosur and the European Union is natural because in South America we are all descendants of Europeans,” said Macri at the time, who also received harsh criticism.