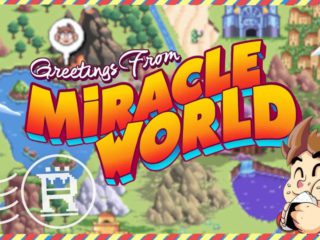 Alex Kidd in Miracle World DX will go on sale worldwide next Tuesday June 22nd; two days before the date initially contemplated, June 24. Merge Games, distributor of the work, whose development is carried out by the Spanish Jankenteam, have communicated the decision accompanied by a new game trailer, where we can see how the work has changed with respect to the original title and how some of its worlds look like. Classic platform with the flavor of SEGA.

One of SEGA’s pets is back; Alex Kidd arrives June 22

Alex Kidd in Miracle World DX was revealed around this time a year ago. For the last few months, the Jankenteam team has been working to revive, renew and keep intact the essence of a legendary SEGA character, as it is still the return of a title published in 1986 for Master System. This time his home will be consoles such as Xbox One, PS4, Xbox Series X | S, PlayStation 5, Nintendo Switch and PC (Steam and Epic Games Store).

In this new video we can see some of the most recognizable scenes in the game; now with a renewed artistic design, remastered music and new game modes, like a boss rush where we will face all the bosses one after another. Its special emphasis on color and lighting can be enjoyed on both the classic and new levels, as it is not only a remake, but also includes content previously unreleased in the work of twenty-five years ago. With the push of a button we can switch between current and classic graphics; or vice versa.

Alex Kidd in Miracle World DX will have two editions in physical format, apart from its digital distribution. On the one hand, the standard (reduced price), which comes with a color manual and a key ring; on the other, the so-called Signature Edition, which apart from the above brings an art book, the original soundtrack, a collector’s box and other exclusive details. This is the content of the Signature Edition, which will cost around 60 euros to change: