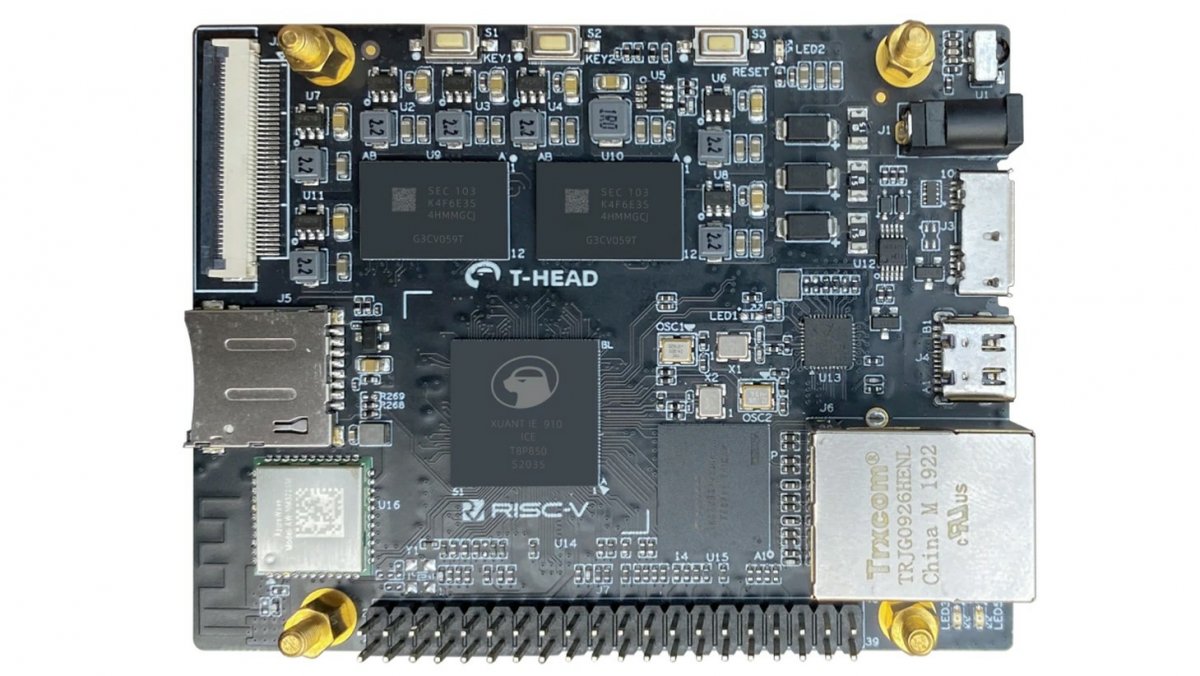 The semiconductor division T-Head (PingTouGe) of the Chinese trading and cloud giant Alibaba has developed the system-on-chip “ICE” with two Linux-compatible RISC-V cores (RV64GC) of the XuanTie C910 type. There is also a Vivante GPU (GC8000UL) in the SoC. The company Sipeed is now selling the single-board computer RVB-ICE with the T-Head chip, 4 GByte LPDDR4-SDRAM and 8 GByte eMMC-Flash on the Alibaba trading platform AliExpress – but for 475 US dollars and only in small numbers.

According to the data known so far for the T-Head ICE and the RVB-ICE, the two XuanTie C910 cores run at 1.2 GHz. This means that the processor should be about faster than the Allwinner D1 with only one XuanTie C910 core and 1 GHz on the RVBoards Nezha, which feels very slow.

The RVB-ICE should run on Android 10 and Debian 11; the Android port of RISC-V comes from T-Head itself.

The RVB-ICE has a Gigabit Ethernet connection and a WLAN module. There is no HDMI socket, instead a display can be connected using a ribbon cable and Sipeed provides a compatible 7-inch display (including a touch sensor).

How to connect USB input devices is not entirely clear from the description; therefore there is a MicroUSB socket.

According to the description, the USB-C port is possibly intended for debugging (“Serial Port”).

Linux distributions for RISC-V are mostly designed for CPU cores that meet the RV64GC specification. However, there are only a few affordable RV64GC SoCs available so far. The XuanTie C910 was also announced in 2019.

Introduced in 2020, the SiFive HiFive Unmatched with SiFive Freedom U740 costs almost $ 700.

Actually, the BeagleV Starlight should have appeared with the JH7100 from the Chinese SiFive partner StarFive. But the project was discontinued for the time being. Instead, something similar is planned by Radxa.

Antmicro develops that Plug-in module Arvsom initially with JH7100, later with JH7110, which should fit on base boards for the Raspberry Pi Compute Module 4 (CM4).

Things have calmed down around other projects for RISC-V single-board computers, such as the PicoRio.