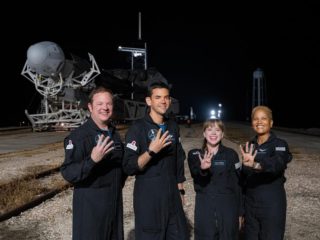 Miami, Sep 14 (EFE News) .- The first space mission integrated entirely by civilians, Inspiration4, is about to take off in a SpaceX Dragon capsule this Wednesday from the Kennedy Space Center in Florida.

With 80% favorable weather conditions, the weather seems to contribute its part for the launch scheduled for this Wednesday at 20:02 (00.02 GMT on Thursday, September 16) of the Falcon 9 rocket, on which the capsule will be mounted. Dragon, both from the private firm SpaceX, responsible for this three-day mission and in which NASA will be a mere spectator.

A businessman, an engineer, a medical assistant and a science educator will go aboard the capsule which, on its orbital journey, will reach a height of almost 575 kilometers, higher than the International Space Station (ISS) and the space telescope. Hubble.

Benji Reed, director of manned missions at SpaceX, acknowledged today that he gets “goose bumps” when observing the speed with which the mission was organized and prepared, for which its four crew members have been vaccinated against covid-19 and prevention protocols have been respected.

At a speed of about 28,160 kilometers per hour, the capsule will circle the planet every 90 minutes, which is a journey of greater scope than those recently made by millionaires Richard Branson and Jeff Bezos.

On board the ships of their respective private space companies, both made suborbital travel at a speed three times the speed of sound that allowed them to experience weightlessness for a few minutes.

In Inspiration4, the only billionaire is Commander Jared Isaacman, 38, founder and president of the firm Shift4 Payments, lover of aviation and who financed the space voyage of the other three crew members, at a cost that has not been given. to know.

With him will travel Hayley Arceneaux, 29, a cancer survivor and physician assistant at St. Jude Children’s Research Hospital, who will be the youngest person to fly into orbital space.