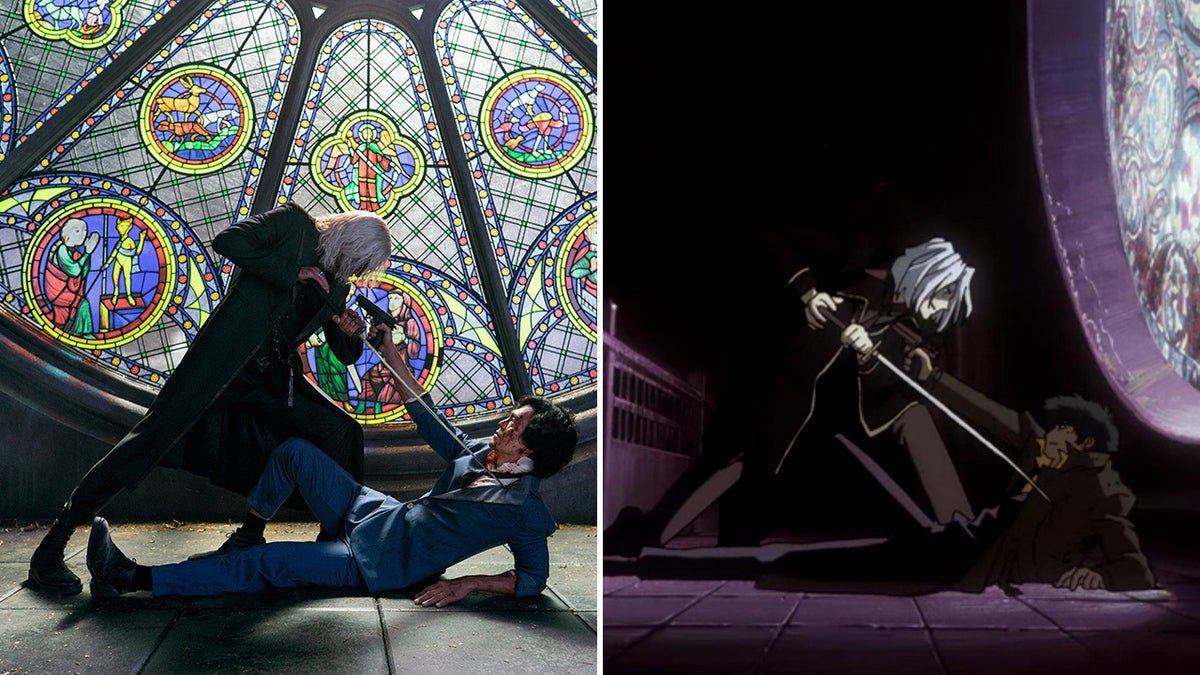 All the tributes that Netflix’s Cowboy Bebop makes to the original anime: are they so much alike?

The live-action version of Netflix’s Cowboy Bebop may not be a 1: 1 remake of the anime, but it gets pretty close at times. Many episodes feature key character moments and fight scenes taken directly from the source material..

How close is the live action series? Let’s break down the scenes that bear the most resemblance to anime.

The similarities between the two series are more than evident in the first episode, which closely follows the episode of the anime “Asteroid Blues”.

In both cases, our heroes are on the trail of drug smugglers Asimov and Katerina, and we meet these two characters for the first time in a New Tijuana bar called El Rey. Both versions show Asimov getting high with Bloody Eye and attacking rival gangsters.

Asimov and Katerina meet an equally tragic end in both versions when their ship is shot down by the ISSP. The main difference is that Katerina shoots Asimov in the anime, while Faye mortally wounds him in the live action series. Don’t forget that Faye hadn’t made her anime debut yet.

Lastly, both versions have a scene where Spike and Jet are eating peppers and meat (without the meat).

This episode too includes a fun nod to Cowboy Bebop: The Movie, adapting the scene in which Spike nonchalantly interrupts a shoplifting. Although in this case it is a robbery in a casino.

The second chapter of the live action series delves into anime, introducing the deranged terrorist known as Teddy Bomber from the episode “Cowboy Funk.” Just like in the anime, there is a scene where he gets very angry when no one seems to pay attention to him.

In this episode we also see for the first time the elders of the Red Dragon Syndicate. But while in the anime they are three identical-looking old men, here they are shown to be a more diverse group of gangsters in masks. Even later we find out that one of them is Vicious’s father, a big deviation from anime.

Episode 3 has many points in common with the anime episode “Stray Dog Strut”, as we see Spike and Jet confront Abdul Hakim and meet Ein the Corgi for the first time. Both versions even show a similar martial arts fight between Spike and Abdul..

The live-action version differs by showing us more of Abdul’s background and motivations. And while in the anime Abdul resorts to plastic surgery to change his face, in the live action series he uses a hologram disguise.

Episode 4 features eco-terrorist Twinkle Maria Murdoch and her masked henchmen. These characters should definitely be familiar to anime fans, as both Maria and her thugs wear outfits very similar to those seen in the anime episode “Gateway Shuffle”.

The climax of this episode also features a familiar shot of Faye’s ship falling apart, similar to the scene where she and Spike run towards the hyperspace door in the anime.

This episode offers a new twist to the anime episode “Brain Scratch”, which also deals with the reward for the cult leader, Dr. Londes. In the anime, Londes turns out to be a hacker trapped in a digital coma. In the Netflix series, she is revealed to be a rogue AI.

This episode too serves as a first cameo for Radical Ed, who by now had already debuted in the anime.

Episode 7 features one of the most heartbreaking and important references in animeas we learn of Faye Valentine’s tragic past. This episode shows Faye watching a video message that her younger self recorded, and that message is almost identical line by line seen in the anime episode “Speak Like a Child”. Even the haunting piano chorus is the same.

Episode 8 is another that has a deep similarity to anime, in this case the episode “Pierrot Le Fou”. Various moments from this episode serve as direct references to the anime., including a shot showing Pierrot’s shadow receding after Spike is injured in the blast.

There are two differences that are worth noting. In the anime, Pierrot has an excruciating fear of cats, while in the live action series he is of dogs. We know that this phobia is related to his origin story, in which he saw how he experimented with dogs like Ein.

The live-action Pierrot also has a real reason to attack Spike in the Netflix series, as he is an assassin hired by Vicious. Lastly, in the anime, Spike uses Western throwing knives, while in the live-action version, he carries Japanese kunai.

The first season comes to a dramatic conclusion with an ending that borrows from the anime episode “Ballad of Fallen Angels,” though the conclusion of this episode leaves the characters in very different places.

As Spike and Vicious fight and come to a standstill inside the church, recreate one of anime’s most iconic shots in the process.

Their fight also ends the same way, when an injured Spike falls through the window in slow motion. We even hear the same song: the beautifully sad “Green Bird.”

These are the similarities (and differences) of the Cowboy Bebop series on Netflix which has just been released and the original anime, which we also recommend. If you want to know what we think of this new adaptation, do not forget to take a look at our review.