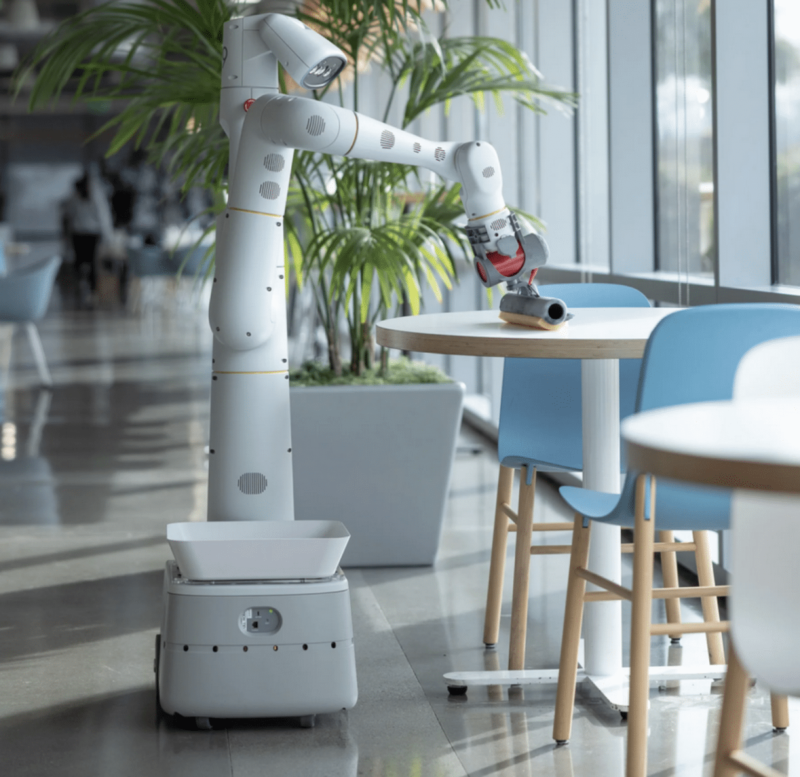 The group presented the robots, which essentially consist of a robot arm mounted on a small, mobile platform, for the first time in 2019. The fact that the machines are primarily intended to cope with everyday tasks, however, has nothing to do with the fact that Google is planning to bring household robots onto the market. Cleaning, clearing and sorting are tasks in unstructured, changing environments that are particularly difficult for machines to cope with because they have to take into account an extremely large number of situations and work out possible solutions for the respective task.

Ironing is not easy for robots either

Spanish researchers from the University of Madrid already showed in 2017 how difficult it is for a machine to simply iron. Your humanoid robot is planning initially the sequence of movements on the basis of his image processing. During the actual ironing, the robot continuously evaluates the force sensors in its arm and regulates the iron’s path so that the force on the fabric remains as constant as possible. Finally, another image evaluation analyzes any wrinkles that may have been produced or that have remained. This forms the basis for planning the iron’s next route – and so on. The whole thing works – is but quite slowly.

Bremen researchers are also working on the everyday suitability of robots in the EASE project. With the Household Marathon Experiment test how well your robots can solve complex tasks in a human household. The first specific task was to bring a bowl, a spoon, a mug, a milk carton and a cereal box to a dining table. The second was to clear the table again, put the washable items in the dishwasher, and put the groceries back away. In 25 runs, the robot only produced such critical errors twice that it could no longer solve the task. The software used for this works on the one hand with symbolic logic. But the robot should also be able to learn from experience.

The Alphabet developers, on the other hand, relied on reinforcement learning – a technique in which the machine tries out different solutions and gradually learns to differentiate between meaningful and meaningless actions. The first task of the 30 robots in 2019 was Sorting garbage. Over 100 Everyday Robots can now follow Company details learn new tasks within a day. However, the company has not yet presented any technical details or even detailed publications.