Although they have not yet proclaimed him president of Peru, Alberto Fernández already congratulated Pedro Castillo 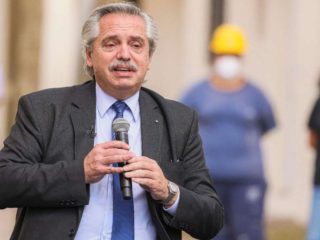 Alberto Fernandez he came forward this Thursday to the Peruvian electoral authorities and congratulated “the elected president of Peru” Pedro Castillo.

// The lapidary irony of Jair Bolsonaro: he crossed Alberto Fernández for his controversial phrase: for you and for Maduro there are no vaccines

What happens in peru

While Castillo was proclaimed president from the Casa Rosada, in Peru the uncertainty about the result of Sunday’s ballot gained new momentum after Keiko Fujimori demanded the annulment of some 200,000 votes and a prosecutor investigating her for a money laundering case requested her arrest .

It is the first time in the electoral history of the country that in a presidential ballot a candidate presents such a number of requests for the annulment of votes.

Fujimori, accompanied by her campaign spokesperson and former legislator for her party, Miguel Torres, announced the presentation of a request to the electoral tribunal to annul 802 electoral records, which she said represented about 200,000 votes.

If he succeeds, then he could win the election because Castillo now surpasses her by just over 71,000 votes.

The president of the National Elections Jury, Jorge Salas, estimated that at least 12 days will be needed to try to respond to the request of the candidate.

“I think it would be reasonable to think that some minimum time should be taken to be able to decide what is pertinent without the need to run over or abuse time by delaying,” he told local radio. RPP.

News that is being updated-.