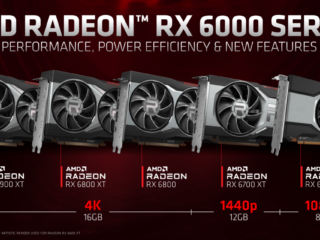 With the Radeon RX 6600 XT, AMD wants to offer gamers with full HD monitors an upgrade option and alternative to the GeForce RTX 3060 from Nvidia. The PCI Express 4.0 graphics card will be available for around 380 euros from August 11th from manufacturers such as Asrock, Asus, Biostart, Gigabyte, MSI, Powercolor, Sapphire, XFX and the company Yeston, which is mainly active in Asia, an AMD – There will be no reference design.

It remains to be seen whether the card will actually be available in sufficient numbers so that street prices do not go through the roof again immediately. In any case, AMD states that the card is not very attractive for crypto miners because it has a comparatively narrow memory interface, which reduces the mining performance.

The coolers of the cards shown so far occupy at least two slots, and many protrude well beyond the length of the card itself. At most, this is really necessary for particularly quiet cooling, because the card consumes around 160 watts according to the AMD starting specification and uses an 8-pin connector from the power supply unit. Only Asrock has already shown a short model with just a single fan. A second Asrock model, Gigabyte and XFX use three axial fans, the other manufacturers use two.

The video encoders and decoders correspond to those of the other RX-6000 cards and relieve the processor when playing and creating videos in H.265 format, for example. The modern AV1 codec is processed for playback on the graphics card.

The heart of the Navi23

The Radeon RX 6600 XT is home to the new Navi-23 chip, which AMD has presented with the mobile offshoot RX 6600M and the Pro W6600. On the RX 6600 XT, however, it is used in full configuration with all 32 compute units. The typical game clock is 2359 MHz and so the card achieves a computing power of 9.66 trillion single-precision computing steps per second (TFlops) – that is the level of the Radeon RX 5700 XT from the previous generation.

The RX 6600 XT has 8 GB of graphics memory – AMD does not currently allow other configurations for its partners. The GDDR6 memory is connected to the GPU with 128 parallel data lines and transmits 256 GByte / s. That is 43 percent less than the similarly powerful RX 5700 XT. As in the RX-6000 sister models, AMD uses a large buffer memory on the chip in the RX 6600 XT so that the card can still bring its performance to the road.

Like the Radeon Pro W6600 and its mobile sister, the RX 6600 XT only communicates with the processor in the PC via eight PCI Express 4.0 lanes, which should not be a disadvantage in this performance class, but also for competitive esports games .

In order to present the map, no own performance measurements may yet be published. AMD shows its own benchmarks of the Radeon RX 6600 XT, which are used in games such as “Forza Horizon 4”, “Cyberpunk 2077”, “Red Dead Redemption 2” and “Assassin’s Creed Valhalla” in full HD resolution between 2.2 and 2, It should be 5 times as fast as the still very popular GeForce GTX 1060.

Compared to its main competitor, Nvidia’s GeForce RTX 3060 with 12 GByte graphics memory, AMD sees the RX 6600 XT ahead of 10 current games by around 15 percent in full HD resolution; Both cards achieve frame rates of almost 70 to well over 100 frames per second.

AMD also provides comparative values ​​for its own competition. The Radeon RX 5600 XT is outbid by 40 to 70 percent – the latter in “Doom Eternal”, the former in “Assassin’s Creed Valhalla”, “Forza Horizon 4” and “Borderlands 3”.