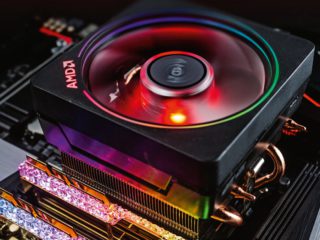 AMD allegedly wants to say goodbye to so-called pin grid arrays (PGA) in desktop processors. The chip manufacturer has been using this design since socket A for Athlon CPUs, in which the pins for contact with the mainboard are on the CPU. Instead, the upcoming AM5 platform is to switch to a Land Grid Array (LGA). With LGA sockets, the pins for contact with the CPU are located in the mainboard – the processors only have golden contact surfaces. So CPU pins can no longer bend, motherboards are more sensitive.

Intel has been using this principle for generations. A metal frame with a lock presses the CPUs into the LGA sockets to ensure perfect contact. AMD used the LGA construction principle so far only for server series, most recently the LGA4096 for Epyc 7001, 7002 and 7003, as well as their workstation offshoots Ryzen Threadripper (Pro).

Plus point for LGA sockets with locks: Processors can no longer stick to the CPU cooler when they are removed if the thermal paste is cold and thus acts as an adhesive.

“ExecutableFix” shows self-created render images via Twitterhow the CPU version AM5 and the first Zen 4 processors could look like. The heat spreaders for distributing the waste heat and for mechanical protection of the silicon chips should be high compared to previous Ryzen models. In this way, AMD creates space for stacked chips (3D stacking), which the chip manufacturer would like to try out within the Ryzen 5000 family: With the V-Cache, AMD cache dies directly on the compute chips in order to achieve level 3 -Cache to increase up to 192 Mbytes.

Compared to AM4, AM5 with 1718 pins (LGA1718) should have 387 additional contacts. Videocardz summarizes rumors, according to which AMD wants to use the additional contacts for four more PCI Express lanes, for example for a second M.2 SSD connected to the CPU. In addition, with AM5, the change to DDR5 RAM is pending.