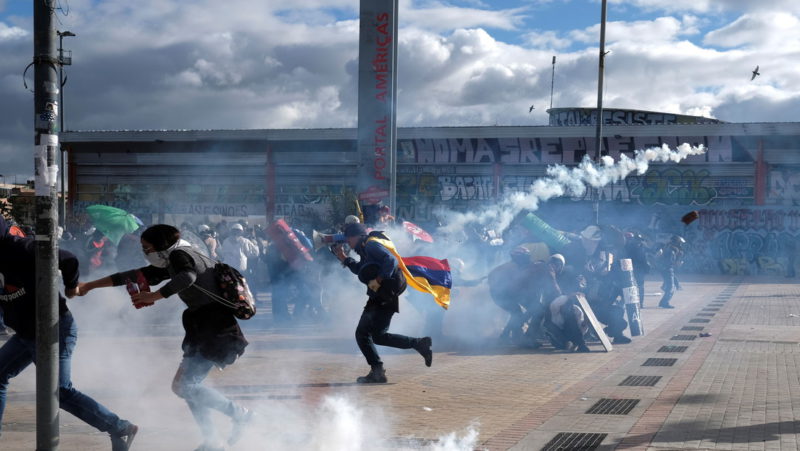 Protests against the Government and clashes with the security forces were registered in the main cities of Colombia this Tuesday, the day on which the installation of the National Congress was completed and the 211 years of independence of the country against the Spanish empire.

Most of the mobilizations began in a festive atmosphere in which thousands of people took to the streets to demand justice, employment, health, education and respect for human rights.

However, in some cities such as Bogotá, Medellín, Barranquilla, Popayán, Neiva and Ibagué, riots were recorded in the afternoon. Groups of protesters blocked roads, threw objects and the police responded with the use of force.

Situation at this time in the #LomaDeLaDignidad in Cali. They are attacking the peaceful and joyful mobilization of the people. Bullet and gas for the people who ask for education. @SusanaBoreal@danielalozanocu@intiasprilla@itamaria83@MafeCarrascal@ alejarojas_g@DavidRacero@charry_managerpic.twitter.com/YrxyTfO12i

Likewise, as has happened since the national strike began its mobilizations on April 28, Cali became the epicenter of strong acts of violence, which this time left at least six soldiers in uniform and 19 civilians injured. according to local media. In the city of Bucaramanga there were also dozens of injured.

#NewsW | Riots continue in the La Universidad neighborhood, in Bucaramanga. The Police reported a uniformed man injured after alleged attacks with explosive devices, such as fireworks. On the other hand, human rights defenders report at least 33 people injured. pic.twitter.com/343UVFoCzg

“To stop excessive police violence against protesters and in particular against young people,” demanded the president of the Central Unitaria de Trabajadores (CUT), Francisco Maltés, from an event in Bogotá.

For his part, the Colombian president, Iván Duque, during his opening speech of the new session of Congress, recognized that the country has a “historical debt” with the poorest.

“We know and understand that there are historical debts to settle, that there are many frustrations that we as a society feel, but the solution is found by working as a team”, manifested the mandatary. Duque paid tribute for the Independence Day to the Military and Police Forces, to the families of all the victims of the pandemic and violence in the country.

On the other hand, the National Unemployment Committee, which called these marches, delivered to the Legislative a package of ten bills that resulted from its emergency specifications, discussed in several Colombian municipalities after the cessation of street activities in mid-June, to give way to a new strategy. Some analysts do not rule out the participation of that leadership in the upcoming legislative and presidential elections.

The bills refer to the following issues, which were already contemplated in their demands since 2019:

This new day of protests occurs after the marches and sit-ins lost strength after the withdrawal of the Unemployment Committee, and the president complied with the main demands of the protesters, amid social pressure.

The theme of the police violence against the protesters acquired greater international relevance after the visit of the Inter-American Commission on Human Rights, which recommended in its report to separate the Mobile Anti-Riot Squad (ESMAD) from the Ministry of Defense, in view of the complaints of “serious human rights violations “in the context of the demonstrations.