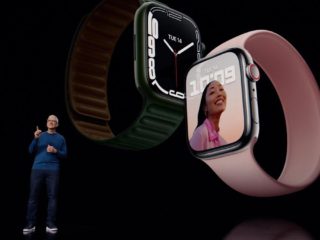 Apple also redesigned the user interface of the new watch with larger buttons, the bezel is only 1.7 millimeters, it charges 30% faster than the Series 6 and the battery lasts for 18 hours.

The Apple Watch Series 7 will be available in five colors and will cost $ 399 when it launches later this fall.

The firm led by Tim Cook announced that the smartwatch detects when the user starts pedaling a bicycle to remind him that he can start a cycling class through the device, which comes equipped with a new technology to detect when falls of the bicycle occur. bike.

The Cupertino (California, USA) company also surprised this Tuesday with the presentation of a new standard iPad, with the in-house A13 Bionic chip and a 12-megapixel front camera, and with an iPad Mini, the version more small of the popular tablet.

The standard iPad will have a minimum price of $ 329 for the 64-gigabyte version (which will go up as storage capacity expands), while the iPad Mini will cost $ 499.

The watch and tablets were the opening act for what is expected to be the big announcement of the day, the new iPhone phone, which remains the company’s best-selling product and accounts for more than half of all its revenue.