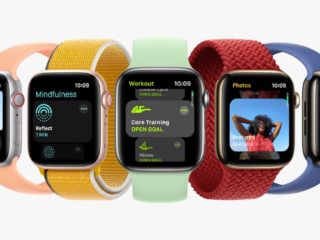 Apple presented the new version of its smartwatch, called Series 7, on Tuesday evening. Contrary to what was previously assumed, Apple has not significantly changed the design of the Apple Watch.

The case should only be slightly larger, but flatter than its predecessor. Instead of 44 millimeters, the large model now measures 45 millimeters. The 40-millimeter version will be replaced by one with 41 mm. In addition, the edge around the screen has become around 40 percent narrower, so the display area is larger – according to Apple, almost 20 percent larger than the Series 6. Compared to the Series 3, the increase is 50 percent. The always-on display is said to shine up to 70 percent brighter than that of the Series 6 when inactive indoors and when the wrist is lowered.

Due to the larger image area, the Series 7 offers more space for dials and additional information (complications), according to Apple. Apps should also have more space on the display. In the news app on the Series 7, an on-screen keyboard is available for the first time. According to Apple, the smartwatch is dust and water resistant according to IPX6 certification. In addition, the watch display should be thicker and less sensitive to falls and “break-proof”.

Apple hasn’t made major changes to the design of the new watch, but …

The sensors apparently remain unchanged: The Series 7 has an accelerometer, a gyroscope and an active altimeter. In addition to the heart rate sensor with 1-channel ECG, there is also a pulse oximeter that measures blood oxygen saturation. In addition to GPS, Bluetooth and 5 GHz WLAN, Apple’s U1 ultra broadband chip is also on board.

Apple calls a battery life of 18 hours, which corresponds to the value of the predecessor, despite the larger display. The Series 7 should be able to charge 33 percent faster than the Series 6. A cable with a USB-C connector is included for charging.

The Series 7 is offered as a WiFi and a cellular version with eSIM. In addition to the aluminum model, which Apple offers in five colors (black, gold, blue, red and dark green), there will be three stainless steel versions and two with titanium housings. The prices are to start at 399 US dollars for the aluminum version with 41 mm, other prices are just as uncertain as the German ones. Customers have to be patient: the Series 7 will not be available for pre-order until later in the fall. Apple has not given a date.

The older Apple Watch Series 3 and SE watches will remain in the range, their prices will probably not be changed: The Series 3 with 38 mm is said to cost 199 dollars (in this country 219 euros) and is only available with GPS. The SE starts with 40 mm for 279 US dollars (299 euros), the model with Cellular costs 50 dollars and 50 euros more respectively. When the Series 7 starts on sale, Apple will no longer offer the Series 6.